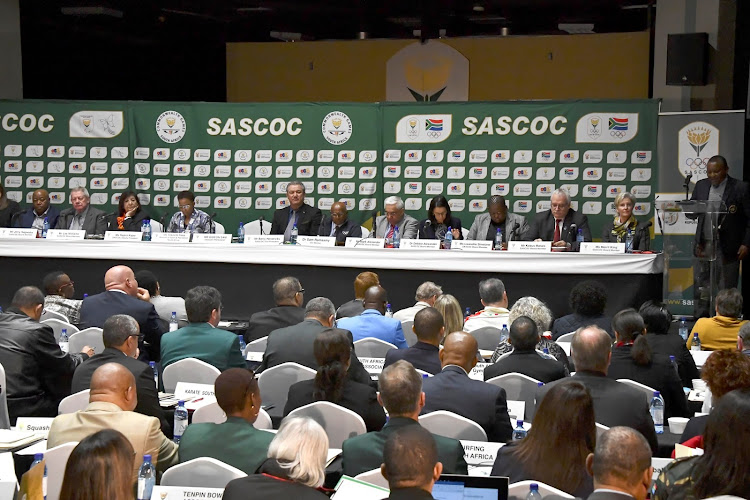 A fresh controversy has engulfed the SA Sports Confederation and Olympic Committee (Sascoc), this time to do with the body bringing disciplinary action against suspended acting president Barry Hendricks.

Sascoc’s Judicial Body has been investigating charges against Hendricks for more than three months.

But several sports officials are claiming the body was not set up correctly, a charge denied by the Sascoc board, led by acting president Aleck Skhosana.

However, four of the seven people whose names have been linked to the Judicial Body have told TimesLIVE they had not been appointed and they had not been involved in any aspect of the Hendricks disciplinary process.

SO WHO IS SERVING ON THE JUDICIAL BODY?

Judicial Body chairman Willem Edeling said he had been appointed by the board in 2018, when the Judicial Body was added to the Sascoc constitution.

The charter states “the board shall appoint the members of the Judicial Body” and that it must comprise at least seven members, each of whom will have one vote.

Asked by email if the Judicial Body was a one-man show, as claimed by some sports officials, Edeling replied “kindly approach Sascoc”.

THE BACKGROUND TO THE DISCIPLINARY

The disciplinary action stems from an allegation by Tennis South Africa (TSA) board member Ntambi Ravele that Hendricks and TSA president Gavin Crookes conspired in February to block her from standing in the Sascoc elections.

The ballot was scheduled for late March but was postponed because of the coronavirus pandemic.

She complained to sport, arts and culture minister Nathi Mthethwa who referred the matter to Sascoc who in turn hired an advocate for a legal opinion.

After the advocate found that Ravele had a case to take to arbitration, the Sascoc board in mid-April placed Hendricks on special leave pending an investigation by its Judicial Body.

That investigation was one of three arising from Ravele’s claims.

An arbitration was conducted and the arbitrator earlier this month ruled in favour of Hendricks, saying there was no evidence to back Ravele’s claim.

A TSA probe has also been concluded, and although the outcome hasn’t yet been disclosed, the body said there was sufficient cause for steps to be taken against Ravele and Crookes.

That process is ongoing.

Even though Hendricks was cleared by the arbitrator, the Sascoc board has maintained his suspension, on the advice of the Judicial Body chairman.

“The initiators and myself had further discussions this morning,” he wrote on July 13.

“It was concluded that a disciplinary process should be instituted against Hendricks.

"In this regard it would be prudent that he stays on leave of absence as previously resolved by the board.

“A process to facilitate the final charge sheet and recommendations to you of due process to be instituted, will follow soon.”

Edeling declined to comment when asked who the initiators were, saying the matter was sub judice.

Asked if charges against Hendricks had been formulated, Edeling replied “no response”.

Asked when he expected the hearing to get under way, Edeling again declined to respond, saying the matter was sub judice.

IS THE JUDICIAL BODY LEGITIMATE?

The Judicial Body is a relatively new addition to the Sascoc anatomy, being added to the constitution in June 2018.

A year later the board unveiled a seven-person Judicial Body to the general assembly — the body’s highest decision-making body — but the sports bodies that comprise Sascoc were unhappy.

Some federations complained that their nominations had not been considered by the board.

One problem was that only one woman was part of the body, but more than one woman had been nominated.

Depending on who one speaks to, some say the general assembly rejected the Judicial Body, and others say it was up to the board to make tweaks.

Either way, the fact is that four of those named Judicial Body members — Sinawo Makangela, Richard Manyisane, Willie Small and the only woman, Chantelle Nkubungu — told TimesLIVE they had never been appointed.

Amid confusion over the Judicial Body, some federations wrote to the Sascoc board.

The board responded by pointing to another clause in the Sascoc constitution which allows the Judicial Body to co-opt members.

That clause reads: “The Judicial Body may from time to time co-opt members to assist with specific legal matters or disputes.”

The board’s response reads: “It may therefore not necessarily be that only the persons listed above [the seven names that were discussed by the general assembly in June 2019] will preside over every dispute but other competent persons, apart from those on the list of persons listed above, will be co-opted from time to time as the circumstances of each case dictate.

“The Judicial Body is currently in place and functioning under the chairmanship of Advocate Edeling.”

When asked on WhatsApp for the identity of the Judicial Body members, Sascoc’s acting CEO replied with a list of names that matched the original seven — Edeling, Small, Manyisane, Nkubungu, Makangela, Marius Oosthuizen and Johannes Bakker.

He then added: “These were the names submitted to the chair — he has the authority to co-opt or select people he feels have the requisite expertise.

"The [Judicial Body] is independent of the board.”

When Edeling was asked who the other members of the Judicial Body were and when they were appointed, he replied: “I unfortunately cannot discuss professional volunteers who availed themselves to serve.”

Sascoc acting president Skhosana was adamant the Judicial Body was never rejected by the general assembly last year, and added that other matters, apart from the Hendricks issue, had also been referred to them by the Sascoc board.

Yet the identity of the Judicial Body members, and how and when they were appointed, remains a mystery — SA sport’s very own Secret Seven.