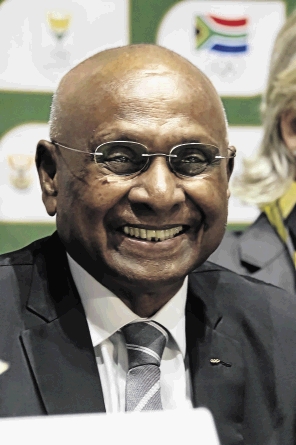 Dr Sam Ramsamy, pictured, one of the founding members of Sascoc, has been appointed as a mediator to oversee the elections. IOC told Sascoc to get its house in order via a letter sent last week.

Sascoc has until November to elect a new board or else it will be put under administration.

The arbitration of Ntambi Ravele and the suspended acting Sascoc president Barry Hendricks landed the sports umbrella body in trouble.

The drama started in February when Ravele, a board member of Tennis SA, was barred to stand for elections as she was allegedly blocked by Hendricks.

She then complained to sports minister Nathi Mthethwa, Sascoc, and Tennis SA.

Sascoc acting president Aleck Skhosana yesterday confirmed it received the letter and will act according to the instructions of the IOC.

"We received the letter and we've responded as the board, and we welcome the appointment of Dr Sam Ramsamy as the facilitator to assist in the process leading to the elections," Skhosana told Sowetan.

"IOC is the mother body of Sascoc. When they send someone to assist as a facilitator we don't have any problems . We are waiting for his call so we can meet and take the process forward."

Skhosana also said he remains positive that things will be fine at Sascoc soon.

"I'm not worried. I have seen this happening at athletics... remember when IAAF had to appoint their CEO [Jon Ridgeon] to be the arbitrator leading to the elections so that it can be free and fair and acceptable to everybody. Similar things are happening with the IOC, that's why we said we welcome it; nobody can interfere other than the IOC as the mother body."