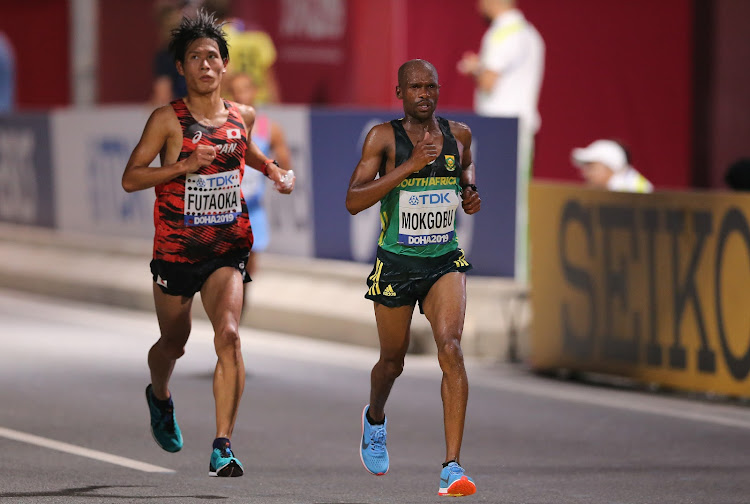 Desmond Mokgobu (R) in action in the men's marathon during day 9 of the IAAF World Athletics Championships at the Al Corniche on October 05, 2019 in Doha, Qatar.
Image: Roger Sedres/Gallo Images

Anxious South African road-running sensation Desmond Mokgobu is worried that his rapidly shrinking savings could prevent him from completing the house he is building for his parents back home in the Senwabarwana village of Bochum in Limpopo.

Mokgobu‚ a member of SA marathon team for the now postponed Tokyo Olympic Games‚ is spending sleepless nights as he has no other job and depends on race prize monies to survive.

“I’m left with the roofing and now I am worried that I may not be able to finish the house‚” said the 31-year-old Tembisa-based athlete.

“It’s bad because I am not sure how am I going to resume construction because there are no competitions.

"This means there is no income which we normally generate from tournament prize monies.

"With the Olympics postponed‚ the situation will become worse‚” lamented Mokgobu‚ who trains at the Zoo Lake in Johannesburg under the banner of Entsika Athletics Club where legendary middle-distance former Olympian Hendrick Ramaala is one of the head coaches. 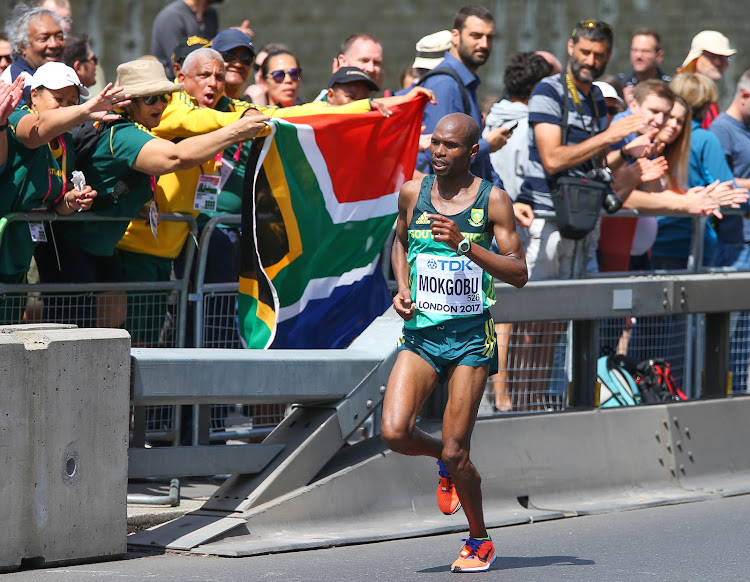 A file photo of Desmond Mokgobu being cheered on by South Africans in London in 2017 during day 3 of the 16th IAAF World Athletics Championship at the Queen Elizabeth Olympic Park in England.
Image: Roger Sedres/ImageSA/Gallo Images

Mokgobu has not participated in a race since December but is grateful that the earnings he earned in that 25km run in India came in handy for him at a time of need.

“My worry is that I don’t have a monthly salary. Just imagine if I had not saved some of the money I won from my races last year.

“Where would I be now?

"Had I not saved‚ it would have meant that after the lockdown I had to move back home in Limpopo and all my dreams would be shattered. I would not be able to pay rent. I can barely survive.”

Mokgobu is not the only athlete in financial distress as Ntshindiso Mphakathi‚ who lives in Soweto and also has no sponsor‚ finds himself in a similar situation.

The Port St John-born Mphakathi told TimesLIVE that he has no idea how he will repay the amount he owes to a furniture store as he is already struggling to afford his rent.

“To be honest with you my brother‚ at the moment I don’t know what is what.

"As I speak to you now I have furniture that I took on credit from (a Johannesburg furniture store) and I’m (supposed to be) paying monthly instalments‚” said Mphakathi‚ who trains with Mokgobu at Zoe Lake.

“I’m worried now because I may struggle to pay. Running is my life. It’s not something I do for fun.

“It is not like a part-time job for me. It is something that I gave my life to after high school. This is my job. I also have a responsibility to take care of my family back home in the Eastern Cape.”

Mphakathi said he was eyeing a good finish at what would have been his maiden Two Oceans Marathon this past weekend.

The 51st running of the marathon was to take place on Saturday but was cancelled due to the coronavirus pandemic.

Mphakathi’s coach Ramaala said his athlete was one of the favourites for the Two Oceans‚ which pays R250‚000 to the winner and R25‚000 for finishing fifth.

“I was very confident that I would go there and do something great. I was well prepared.

“I also have a responsibility to take care of my family back home in Port St John in the Eastern Cape. Even though I live in Soweto right now‚ they depend on me. I don’t know what is next because we are stuck. Nothing is moving.”

Another runner who is trained by Ramaala but runs under the Boxer Running Club banner‚ Precious Mashele‚ said he has left “everything in the hands of Gods”.

Like Mokgobu and Mphakathi‚ Mashele derives his sole income from running.

He was set for a good pay cheque at the world half-marathon championships in Poland on March 29 where he was eyeing a top five finish.

“I don’t think I will be able to make ends meet‚" he sad.

"I leave everything in the hands of God.

“I have three other siblings at home and we have no parents. I’m the older one‚ so as you can imagine they are looking up to me to provide for them.”