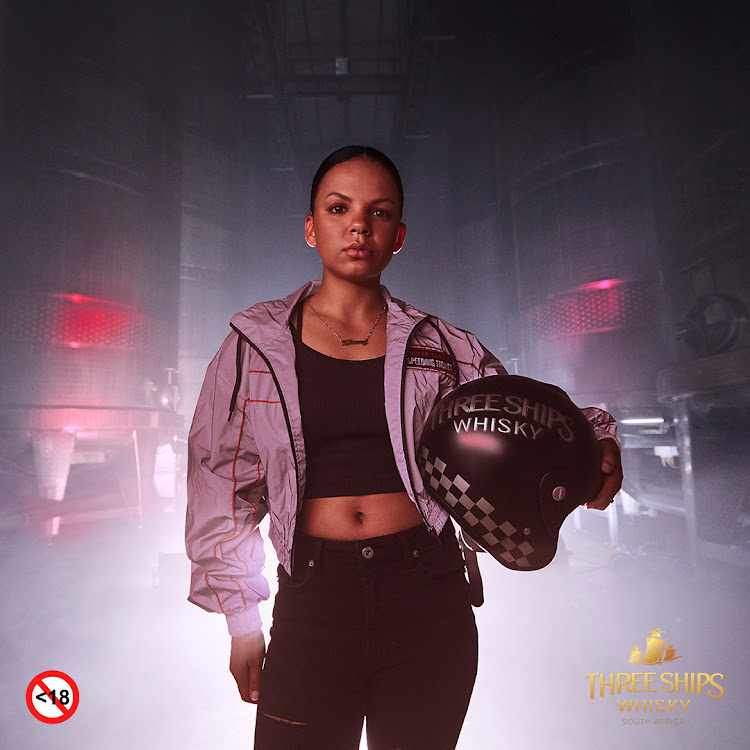 Stacey-Lee May has taken first place at the 'Kings and Queens of Smoke' for four years in a row, earning her the nickname, Queen of Smoke.
Image: Supplied/Three Ships Whisky

You may not believe it when you first meet Stacey-Lee May, but this soft-spoken 24-year-old has made a name for herself as one of SA’s most fearless competitive drivers. Known in racing circles as the Queen of Smoke, May is a household name in spinning — one of the fastest growing motorsports in SA.

Driving her trademark pink BMW M325i, she has made appearances on shows like So You Think You Can Spin, Top Gear SA and The Grand Tour. Most recently, she also starred alongside SA actress Charlize Theron on Netflix's Motorsport show, Hyperdrive. To top it all off, May's hard work and dedication to her sport earned her the Gauteng’s Woman of Honour award in 2019.

It is for this reason that Three Ships Whisky has chosen to feature the talented Queen of Smoke in its #MadeExceptionalMadeHere visual collaboration series that focuses on exceptional South Africans. May has made a name for herself, and similar to the globally-award-winning Three Ships Whisky, has proven that combining passion with hard work can produce perfection.

This mindset is exactly why Three Ships Whisky brought May in to showcase her outstanding spinning skills at the James Sedgwick Distillery in Wellington.

David Dube, the distillery manager, explains that this visual collaboration is a world first for any distillery. "There were certainly multiple risks associated with an activity like this but with careful planning, every variable was thought out, down to the finest detail. This would have been impossible without the help of our dedicated team and our trust in May's skill. Ultimately, we are here to push boundaries, to do world-firsts, and to support exceptional local talent. This is what #MadeExceptionalMadeHere is all about."

May says that her goal is to inspire and empower more women by showing them that they can do anything if they channel their passion. "At the same time, I use every opportunity I have to speak out against drinking and driving. I never take unnecessary risks behind the wheel, and I don't believe that anyone should — regardless of their skill level."

However, this confident woman, who has risen above in a male-dominated industry, is a far cry from the teenage girl who first stepped into this sport less than a decade ago. Born and raised in Eldorado Park, south of Soweto, May finished high school at 16 - one of the youngest in her grade. This, combined with her small stature and soft personality, unfortunately made her an easy target for bullies, which took a toll on her confidence.

As a way to boost her self-esteem, May’s father introduced her to spinning through a family friend. She was a natural, and her talent for executing breathtaking stunts quickly made her a crowd favourite. May has since taken first place at the Kings and Queens of Smoke for four years in a row, earning her the permanent nickname, Queen of Smoke.

* Always drink responsibly. Not for persons under the age of 18.

This article was paid for by Three Ships Whisky.