Akani Simbine runs 100m like he's at the Olympics 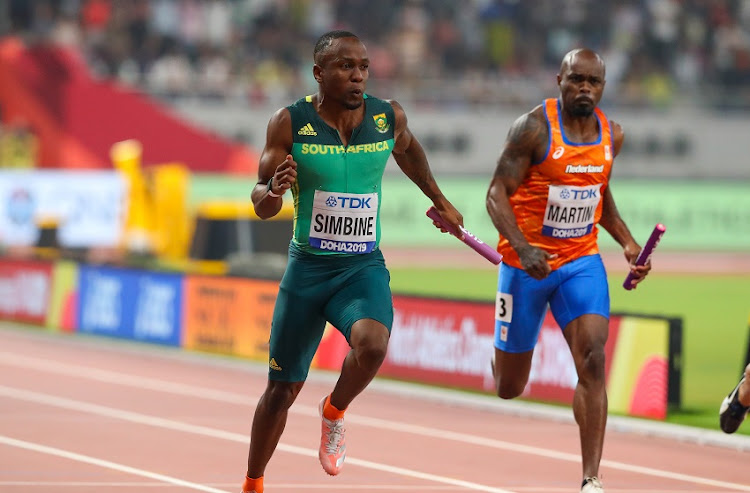 Akani Simbine of South Africa anchors his team home to win the race in round 1 of the mens 4x100m relay during day 8 of the IAAF World Athletics Championships at Khalifa International Stadium on October 04, 2019 in Doha, Qatar.
Image: Roger Sedres/Gallo Images

With the spectre of coronavirus looming large, Akani Simbine ran like he was at the Olympics as he dominated the 100m at the Gauteng North championships on Saturday.

Simbine was fastest in all three rounds of the short sprint at the Tuks stadium, beating a field that featured most of SA’s fastest runners, although his nearest rival was Henricho Bruintjies.

Simbine flirted with the 9.89sec SA record he set in Hungary in 2016 in the heats, clocking 9.91 — the fastest time on SA soil — while the wind was at his back.

The breeze turned on him for the semifinals, where he slowed to 10.03, with Bruintjies the next fastest as he took the third semifinal in 10.08, also into a head wind.

But just a few minutes later 19-year-old Phatutshedzo Maswanganyi broke the SA under-20 record as he clocked 10.06 with the breeze, having turned once again, assisting him.

Simbine went 10.01 in the final, but sacrificed another sub-10 effort by celebrating just before he crossed the line, ahead of Bruintjies (10.08) and Simon Magakwe (10.31).

“We discussed it [coronavirus] before,” said Simbine’s coach, Werner Prinsloo. “The plan was to run good times because this could be one of his only chances to compete.

“Europe might not even be an option [from late May]. Whatever races we have now the plan is to go for it.”

With shutdowns across Europe, Prinsloo said they were uncertain at the moment about their regular training base in Gemona, Italy.

They would normally head over in late May.

All three of Simbine’s runs were inside the 10.05 Olympic qualifying standard, while Clarence Munyai did it once in the 200m, going 20.23 in the semifinals on Friday.

But there were other promising performances.

Matric pupil Prudence Sekgodiso produced a stunning 800m run on Friday to suggest she can fill the void left by Caster Semenya, who won the first 200m title of her career.

Semenya, the Olympic 800 champion, clocked a 23.49 personal best as she claimed the Gauteng North title, but 18-year-old Sekgodiso, already the SA senior champion from last year, showed that the country still has a future in the two-lap race.

She won the provincial under-20 title in a 2min 02.16sec personal best. Not only was she faster than the new senior Gauteng North champion, but her time placed her fifth on the all-time SA list for junior women.

Those ahead of her include Semenya and Zola Budd.

“I didn’t expect it,” said an overjoyed Sekgodiso, who skipped in delight straight after crossing the line. “I was just aiming for sub 2:05.”

But the Tuks high schoolgirl is hoping to go even faster this season.

“My goal is to run sub-two and maybe qualify for the Olympics and world junior championships.”

The qualifying mark for Tokyo 2020 is 1:59.50,  while her time already makes her a medal prospect for the age-group showpiece scheduled for Nairobi in early July.