SA salvage some pride with a convincing win over England 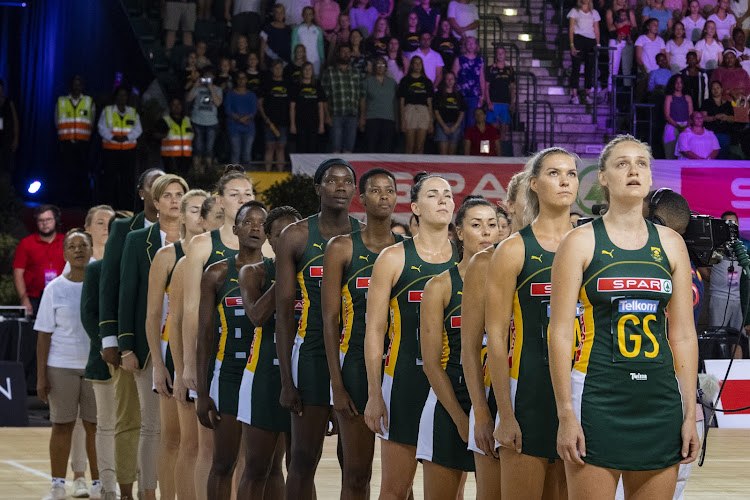 The SA senior women's national team line up before their clash against England in Cape Town on December 1 2019.
Image: Backpagepix

South Africa salvaged some pride with a convincing 54/48 win over England in the third and final match of the Spar Challenge International Netball Series at the Bellville Velodrome in Cape Town on Sunday.

The Netball Proteas went into this match in danger of suffering the embarrassment of being whitewashed at home‚ but they recovered in style from two successive defeats to England to end the series on a high note.

The England Roses will return home as 2-1 series winners but SA coach Dorette Badenhorst will take positives going into their next assignment in the Netball Nations Cup against Jamaica‚ New Zealand and hosts England next month in Birmingham.

Badenhorst said they did not keep possession and lacked cohesion in the two defeats‚ but she was happy that inexperienced Lefebre Rademan and Monique Reyneke got opportunities against strong opposition.

The SA coach will also be happy that defender Phumza Maweni is back to full fitness and captain Bongi Msomi‚ Shadine van der Merwe‚ Khanyisa Chawane‚ Lenize Potgieter and Zanele Vimbela got valuable minutes on the court.

They were tested to their limits by this industrious England side led by Natalie Haythornthwaite‚ which completely dominated the opening two matches as wrapped up the series.

With this victory SA managed their second win over England after six matches this year and they will travel to the Netball Nations Cup in January with confidence that they can beat some of these top-ranked sides.

SA started the match with purpose as Ine-Mari Venter and Lenize Potgieter put the England defence under pressure and they led by six goals after eleven minutes.

At the end of first quarter SA enjoyed a six-goal lead (16-10) after creating most of the chances‚ but England did not make it any easier through attacks from Sophie Drakeford-Lewis and George Fisher.

The Proteas went to the half time break leading by six goals (27-21) following a period of sustained pressure.

England fought back and leveled the score at 35-35 ten minutes after the half time break but SA managed to pull away and they went to the last quarter leading by five goals (41-36).

In the last quarter SA continued to lead and they ultimately pulled off this morale-boosting win where they narrowly avoided an embarrassing whitewash at home.

South Africa coach Dorette Badenhorst may make changes for the second match of the netball Test series against England at the Bellville Velodrome in ...
Sport
2 years ago

Proteas have much to prove in Netball series against England

Spar Proteas netball captain Bongi Msomi has said that her team are not feeling any pressure going into their international Test series against the ...
Sport
2 years ago

England are calling the shots at South Africa’s house party here in the Mother City.
Sport
2 years ago
Next Article