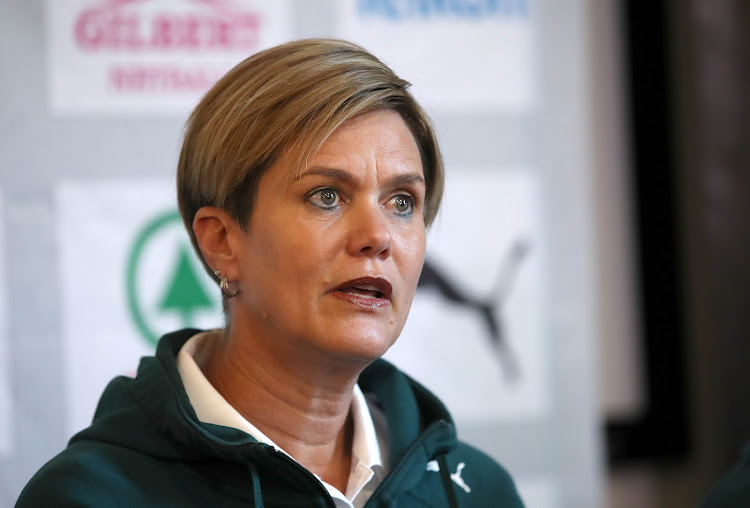 Dorette Badenhorst, head coach of the SPAR Proteas during a press conference ahead of the SPAR Challenge Netball Series between the SPAR Proteas and the Vitality Roses at the Southern Sun Waterfront hotel in Cape Town on 28 November 2019.
Image: Reg Caldecott

SA's netball national team will welcome back star defender Phumza Maweni after she recovered from an ankle injury that forced her to miss the side's successful run in the recent African Netball Championships.

The return to action of Maweni‚ who is based in Australia with the Sunshine Coast Lightning‚ is a huge boost for the Proteas ahead of their meeting with the English Roses in a three-match Test series in Cape Town.

The three matches at the Bellville Velodrome get underway on Friday and continue on Saturday and Sunday.

SA will be looking for revenge after they lost to England in the semifinals and in the third and fourth play-offs at the World Cup a few months ago.

“Phumza wasn’t available for the African Championships because of an injury that happened while she was playing for her club in Australia after the World Cup‚ but she has been cleared to play in this Test series‚” said coach Dorette Badenhorst at the pre-Test press conference in Cape Town on Thursday afternoon.

“She is a brilliant netball player and having her back in the team is precious for us.

"She is among the leadership group and they play their part helping the younger ones to adjust.

"We struggled a little bit with combinations during the Africa Champs in the absence of Maweni and Karla Mostert‚ so it’s great to have her back.”

The Proteas will be without retired Maryka Holtzhausen and Erin Burger but coach Badenhorst said this series is an opportunity for some of the younger players to raise their hands.

“Maryka and Erin have retired and those are two players with lots of experience‚" the coach.

"Luckily Karla is coming back in January for the Vitality Series in England early next year.

"It is important for us as coaches and Netball SA to build depth in this team by giving younger players opportunities to play in competitions at international level.

Looking ahead of the series‚ Proteas captain Bongi Msomi said their target is to be consistent.

“The only thing that needs to happen in this series is for us is to keep improving‚ be consistent and get the new girls to fit in.

"It’s going to be a tough job for us but I am sure that the Roses are also expecting a tough battle‚ which is great‚” said Msomi.

Visiting coach Jess Thirlby said they are looking forward to re-establishing their rivalry with South Africa.

“I think this is becoming the modern day rivalry between the Roses and the Proteas and it is one to look forward to on the calendar‚" Thirlby said.

"We are a developing team that is operating in the performance landscape.

"We don’t make apologies and still wanting to win because that is part of developing a team for the 2023 World Cup. Hopefully we will meet in the final which would be nice‚” said Thirlby.