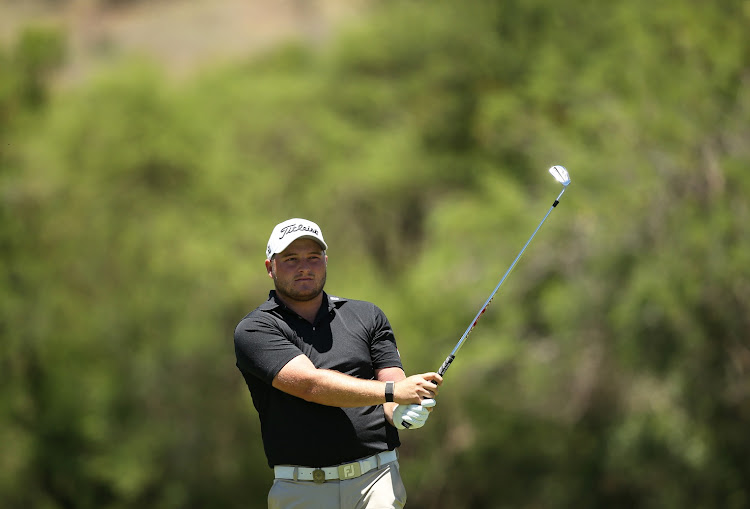 The first part of Zander Lombard’s Nedbank Golf Challenge dream was realised on Friday when he shot a 65 in front of playing partners Ernie Els and Lee Westwood to lead “Africa’s Major” by two strokes.

The next part of that dream quite obviously involves the 18th green on Sunday afternoon.

Playing alongside two former world No 1s with six Nedbank Golf Challenge titles between them, it was Lombard who stole the show with a round that was the best of the day and lifted him to the top of the leader board on 11 under par.

Only Kalle Samooja’s incredible albatross on the par-five 10th hole took some of the limelight from Lombard’s performance.

Lombard is two strokes clear of Louis Oosthuizen, and he admitted to feeling nervous on the first hole where he made bogey.

“Playing with two legends of the game, it was nervy. But I settled down quickly with a birdie on the second and it was just all really good vibes from there,” he said.

As much as he is doing his best not to think about it, it’s impossible to ignore the idea of what a win here would mean for Lombard, never mind the US$2.5m cheque for first place.

“It’s a huge opportunity, but I just need to keep myself calm and do the same on the weekend. I’ve got a great team behind me and the processes are in place. I’m going to stick to my processes. It sounds clichéd but it’s as simple as that. And we see where it puts me at the end of the week.”

Oosthuizen was still feeling the effect of his kidney stones as he struggled through his 72 to go into the weekend on nine under par.

“I’m glad I got through that. It was just not great the whole day. I fought just to get through it. I was fine starting, then the last six holes got me a bit. I felt the pain. I was thinking of that and didn’t really focus on what I had to do. I just need to be a bit more focused on what I want to do and get out there and play some proper golf,” he said.

Oosthuizen was also full of praise for Lombard’s round.

“It was tough out there. You could throw the wind chart away. It was guessing the whole day. It’s difficult. His 65 today was a lot better than my 63 yesterday.”

Lombard’s performance was put into perspective by those of his vastly more experienced playing partners. Westwood lost some ground with his 73 and Els stumbled with an 81.

Finland’s Samooja was responsible for one of the biggest roars from the gallery on Friday as he holed his second on the par-five 10th hole for the first albatross of his career.

“It was a tight four iron. I hit a high draw and saw it bounce towards the hole and I thought, yeah, it’s going to be good. There were a few fans in the grandstand and they were shouting, ‘It’s going to go in the hole’. Then they started cheering on the grandstand, and that’s when we knew it was in the hole,” said Samooja.

Thomas Detry is still well-placed on seven under despite a finish in which he closed with a bogey, birdie, double bogey and bogey over his final four holes for a 71. And Tommy Fleetwood worked his way up to six under par.

Defending Nedbank Golf Challenge (NGC) champion Lee Westwood will return for the 39th edition of the tournament in mid November.
Sport
2 years ago

Who are the men who carry SA’s hopes at the 148th Open Championship?

The 148th Open Championship boasts one of the strongest fields in golf for the tournament’s return to Northern Ireland for the first time in 68 ...
Sport
2 years ago

A sparkling eight-under 63 catapulted Charl Schwartzel into the lead halfway through the second round of the SA Open on Friday.
Sport
3 years ago
Next Article