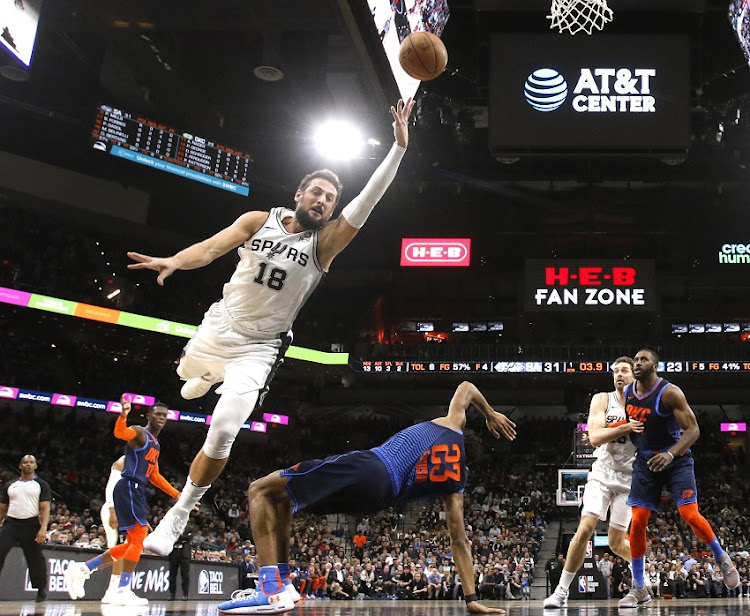 Marco Belinelli #18 of the San Antonio Spurs drives to the basket as Terrance Ferguson #23 of the Oklahoma City Thunder defends at AT&T Center on January 10, 2019 in San Antonio, Texas.
Image: Ronald Cortes/Getty Images

Local fans of NBA champions the San Antonio Spurs‚ the Boston Celtics‚ the LA Clippers and other clubs who have access to pay-channel TV or internet streaming may have been left out in the cold until now‚ but that’s no longer the case.

Sport-loving South Africa will be spoiled for choice on Saturday night‚ with the five-time NBA Champions San Antonio Spurs hosting the 17-time NBA Champions Boston Celtics at midnight SA time‚ with a rebroadcast on Sunday at 5pm on Openview’s e.tv News & Sport channel 120.

“We have always strived to make the game of basketball more accessible to our fans through participation in our sport and exposure‚ and we are thrilled to partner with e.tv in South Africa‚” said NBA Africa managing director and Basketball Africa League president Amadou Gallo Fall in a statement.

“As we continue our efforts to expand our footprint and build on the success of three sold-out NBA Africa Games‚ we have seen growing interest and look forward to reaching more fans in South Africa through live games and additional programming.”

The channel will broadcast more than 65 games throughout the 2019-20 NBA season across the channel and its Openview platform‚ South Africa’s first free-to-air satellite television service.

“South Africa has an insatiable sporting appetite and our partnership with the NBA will most certainly appeal to that‚” said e.tv managing director Marlon Davids.

“Over the past few years we have been implementing strategic growth plans that will ensure that our sports content offering across our platforms is worthwhile for our viewers. We are ecstatic about this announcement and we greatly look forward to a fruitful run with the NBA.”

Throughout the season‚ fans will be able to watch two games per week‚ including one live game as part of the league's ‘NBA Saturdays’ initiative and one delayed game per week.

The NBA held three sold-out Africa Games in Johannesburg in 2015 and 2017 and Pretoria in 2018‚ in support of charities including JUnicef‚ the Nelson Mandela Foundation and SOS Children’s Villages South Africa.