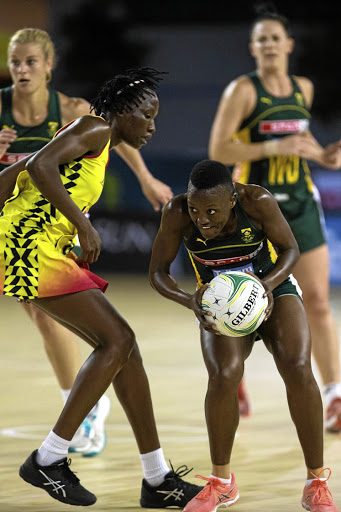 Uganda seemed to continue with their dominance in the tournament that is held in Beville, Cape Town, and wanted a clean sweep. They led the match from the first whistle and the match ended 98-24 in favour of Uganda who are now unbeaten in three games. Lesotho are winless in as many games.

The match of the day was between the world's number five - South Africa - taking on number six, Uganda. This contest was a closely contested one.

Izette Griesel came into this game to play her 50th cap for the Proteas and she was very instrumental in the middle of the court.

The second quarter started like a house on fire with Uganda taking the game to Proteas and levelling matters immediately after the whistle had gone off. The Proteas didn't sit back at all and pushed hard to retain and extend their lead.

The game lived up to expectations and was very physical. Both teams left everything on the court and challenged for every ball. At the end, Dorette Badenhorst's Proteas won the game 50-47 making it four out of four in three days. This is Badenhorst's first tournament ever since she was appointed coach early this month.