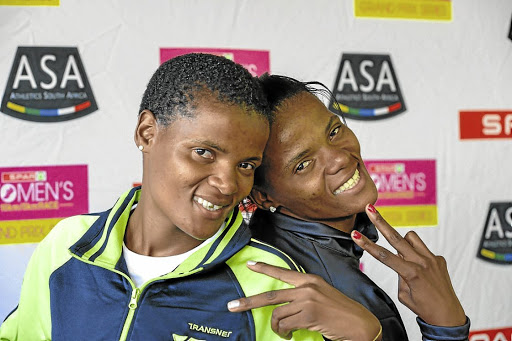 In life, any major change can make you backslide from the things you once excelled in.

The Phalula twins, now 34, used to rule the race fields, but after getting married and having kids, coupled with injuries in between, they have slowed down.

Now, the once lethal twins, are plotting a major comeback. Lebogang and Lebo-Diana have recently disappeared from the podium, but they have attributed that to injuries.

"For me, I've been struggling since I came back from my maternity leave. I had a lot of injuries, because I came back early after giving birth. But that's not an excuse," said Lebo-Diana, now a mother and engaged to be married.

"I don't have any injury now. My focus is to gain back my form. Hopefully, next year I'll be fully recovered and back to my level best. I'm not going to be harsh on myself. I know what I want to achieve and I'm going on my own pace. Don't be envious of other people's success, because you don't know what's God's plan for you. I'm happy for everyone doing well this year."

On Sunday at the Spar Women's 10km Challenge in Pietermaritzburg, KwaZulu-Natal, the twins failed to make it into the top 10, with Lebogang finishing 11th in 35mins 33seconds, while Lebo-Diana took 16th position in 37:07.

Stephen Mokoka lit up the finish chute along Marine Drive as he sped home to claim the Nelson Mandela Bay Athletics South Africa Half Marathon ...
Sport
1 year ago

"I'm doing well with my training. It's just that I'm not focused on competing with elite athletes now... [But] I'll bounce back."

Lebogang, who is now married and a mother of one, won the same title in 2015 and feels she is hitting her stride again.

"With the Spar races, it's not that bad. I've been struggling to be in the top 15. But the Centurion and Pietermaritzburg [races] were better, because I did finish in the top 11. I can see that I'm coming back. I might surprise everyone in the next race [the Joburg leg] and finish in the top three. We are giving others a chance to shine, because when we come back, it's [going to be] double trouble."

With Helaila Johannes taking the Spar races by storm - winning five out of five races, Lebo-Diana said she's not surprised as she knew the Namibian from way back when they used to race together.

The open nature of the women’s race in the Comrades Marathon could make it one of the most exciting and unpredictable contests in years.
Sport
1 year ago

"Helaila struggled when she was about 34 or 35. Look now, she's 39 and is running brilliantly. No one ever complained then when she was struggling," said Lebo-
Diana. "Now that she came back with a bang, some people are suspecting that she's using something. But she is not. I know her. It's just that she peaked at the right age."

The twins will next take part in the upcoming Cape Town Marathon next month. For Lebo-Diana, a top-10 finish will be a major morale boost.

Lebogang chipped in: "I'm also doing Cape Town marathon. Marathons are not easy but I'm hoping for a top-10 finish or to be the first South African to cross the finish line."

Spar races are not the only races the twins have dominated. In November, they finished second and third in the Soweto Marathon's 10km race. Lebogang has three gold and one silver from the Two Oceans Half-marathon, while Lebo-
Diana has four gold and one silver.

Meanwhile, the Joburg leg of the sixth and last leg of the Spar Grand Prix will be at the Marks Park Sports Club on October 6.