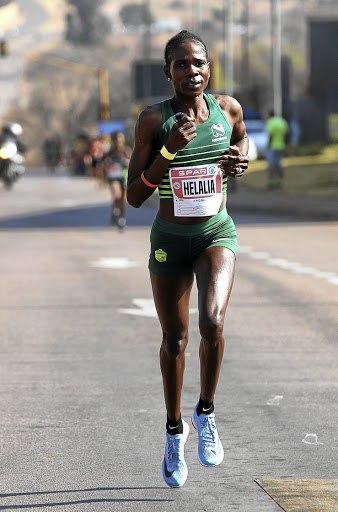 Having different athletes winning the Spar Grand Prix every year is not only good for road running, but for athletics as a whole.

Those were the words of 2017 Grand Prix winner Kesa Molotsane after Helalia Johannes claimed her fourth victory of the six-leg series.

The Namibian continued with her dominance, crossing the finish line in record time of 32minutes, 29seconds in the Spar Women's 10km Challenge in Centurion, Pretoria, on Saturday.

"Helaila's dominance is good. New faces, new future. I'm personally happy with how the Grand Prix has changed over the years," said Molotsane, who was one of the two South Africans in the top 10 - she finished eighth, while last year's Grand Prix champion Glenrose Xaba finished fifth.

"Recently, we have different faces winning the series every year which is fun. That's where the fun is in athletics. No one owns the sport."

At 39 years of age, Johannes said it was amazing that she can still perform at the highest level. "To do what I'm doing you have to put in a lot of work. All this dominance is because of hard training."

Asked if she sees herself as an inspiration to other athletes who admire her, she said: "They must just believe in themselves and know what they want in their career. "

Having recently finished second in the Bogota Half-Marathon in Colombia, the Nedbank Running Club member said she was happy with her Women's 10km Challenge performance.

Johannes broke away from the running pack at 3km and had a solo run until the finish line.

She and Nyahora are preparing for the World Championships in Doha, Qatar, in September.

The fifth leg of the Spar Grand Prix series will be in Pietermaritzburg on August 18.