Essien would relish stint in SA 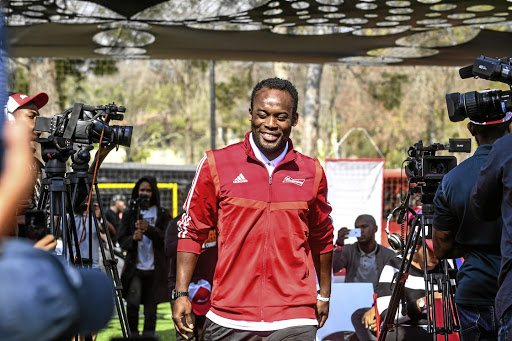 Legendary Ghanaian midfielder Michael Essien would welcome an opportunity to wrap up his illustrious career in SA.

Speaking at the launch of a partnership between multinational beer company Budweiser, Spain's La Liga and the English Premier League (EPL) in Johannesburg yesterday, Essien sounded open to a transfer to the Premier Soccer League.

"You can never say never. I am keeping my options open. SA is not bad. I would like to come to SA," said Essien, who's on the books of Azerbaijani outfit Sabail FK.

Essien, who is turning 37 in December, said that retiring hadn't crossed his mind. Should the Chelsea legend end up coming to SA, he'll be following in the footsteps of his compatriots James Kotei and Richard Ofori, who are playing for Kaizer Chiefs and Maritzburg United respectively.

"I love football, I love football... I have played it my whole life. So I am not thinking about retirement at all," Essien reiterated.

"The Bison" also weighed in on the recent appointment of ex-Chelsea teammate Frank Lampard as the Blues coach.

"I think he can be a success, I am keeping my fingers crossed for him. It's refreshing to see former players coaching the teams they played for," said Essien, who won two EPL titles with Chelsea.

The midfielder is confident that Ghana will beat Bafana Bafana when the two nations meet in the 2021 Africa Cup of Nations qualifiers in November.