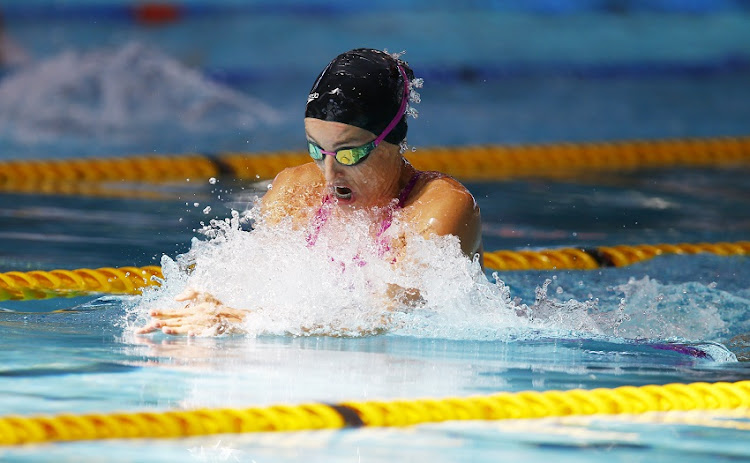 Tatjana Schoenmaker and her Tuks teammate Kaylene Corbett delivered another double act as they won their 200m breaststroke heats at the world championships in Gwangju‚ South Korea‚ on Thursday morning.

Schoenmaker clocked 1min 24.66sec for the second-best time overall and Corbett touched in 2:24.83 to be seeded third.

Canada’s Sydney Pickrem was quickest in 2:24.53‚ but lurking lower down in the field are veteran racers‚ Russian Yuliya Efimova and Shiwen Ye of China.

Corbett‚ only the third SA swimmer after Schoenmaker and Chad Le Clos to advance to an evening session at this gala so far‚ was over the moon with her effort‚ which was also a qualifying time for the Tokyo 2020 Olympics.

“All I wanted to do was try and get one evening swim here‚” said Corbett‚ an education student.

“Two years ago I came to world champs and it didn’t go as planned but this time I’m just happy. This is all I wanted‚ to get under Olympic A-qualifying time.”

Corbett is not far off her personal best of 2:24.59‚ but Schoenmaker‚ the Commonwealth and World Student Games champion in this event‚ still has plenty in the tank.

“After yesterday [mixed medley relay] I was a bit tired‚” said Schoenmaker‚ who went 2:22.92 at the Universiade earlier this month.

“I felt comfortable in the race‚ I definitely know I’ll be able to go a bit faster tonight.”

Schoenmaker will face Efimova and Ye in the first semifinal while Corbett will take on Pickrem in the second race to determine the finalists for Friday.

“Unfortunately we won’t be in the same [semifinal].”

“It’s honestly just the best feeling having a teammate there‚” added Corbett‚ fourth behind Schoenmaker at the university showpiece.

“We talk about it all the time‚ saying we’ve been there with each other through so many things.”

Their SA teammates didn’t fare as well in the morning.

Christopher Reid ended sixth in his 200m backstroke heat in a disappointing 1:58.44 that ranked him 20th overall.

The 1:57.11 he posted at the national championships in April would have ranked him fifth in South Korea.

Erin Gallagher also missed out on a semifinal berth in the 100m freestyle‚ finishing seventh in her heat in 54.64. Her 54.23 best would have sneaked her through in 16th position.

“I’m actually happy with my time considering where I’m at in the pool and how I’ve been feeling‚” said Gallagher.

“It’s okay for now. I’ve got to get back to SA and do some more hard training.”