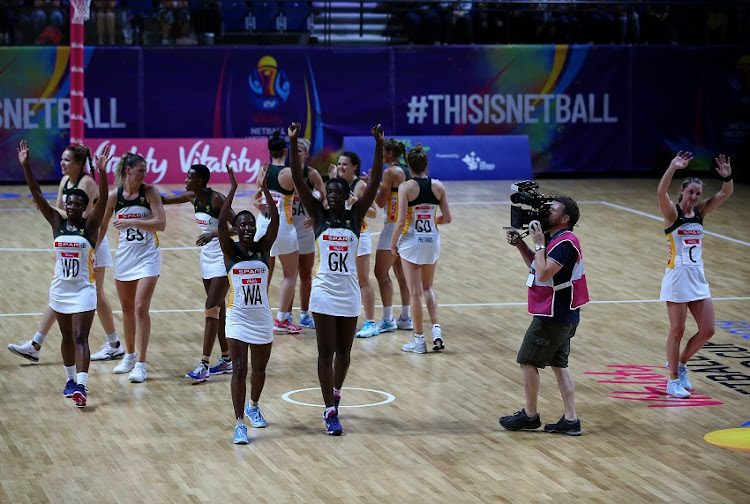 The SPAR Proteas acknowledge the crowds after they won against Jamaica during the Vitality Netball World Cup match between South Africa and Jamaica at M&S Bank Arena on July 14, 2019 in Liverpool, England.
Image: Reg Caldecott/Gallo Images

The 12 Spar Proteas players could be millionaires by the end of the weekend if they win the 2019 Netball World Cup in Liverpool on Sunday.

The South Africans‚ who qualified for the semifinals on Wednesday after beating Uganda for their fifth victory in succession in the competition‚ have been promised a bonus of R1-million each if they go all the way by domestic league sponsors Telkom.

As if that were not enough‚ the national side's title sponsor SPAR have dangled another carrot and the players will share R1-million if they win the tournament.

The Proteas take on tournament favourites England on Thursday night (9pm) and even if they lose this match their place in the semifinals is already guaranteed.

The South Africans will face either New Zealand or Australia in the semifinals on Saturday.

“I think it is only fair that we pay these ladies such monies‚ they have earned them‚” said Netball South Africa (NSA) president Cecilia Molokwane.

They have done it, #SPARProteas have qualified for the #NetballWorldCup semi-finals after 67-40 win over #Uganda. pic.twitter.com/URxR70NFXR

“Even before we talked money with them‚ they were here doing the most‚ delivering and winning games that have put us in the position that we are.

"I think we need to reward great work when we see it‚ in this team I see greatness and believe that they can deliver silverware for the country.

“This will be the first time that netball players in South Africa earn such monies.

"The sport is definitely growing in the country‚ we are seeing an uptake in the sport and also during the recently concluded Telkom Netball League‚ we saw more players getting paid more than what they had previously earned in the past and more sponsors coming on board.

“We could easily have 12 new millionaires at the end of this week‚ imagine how many lives we will change and be impacted by this.

"I believe that the team has earned all the good things coming their way.

"Coach Norma (Plummer) and her support staff have done very well to give us a team that we have today‚ and I think it is only that we reward them accordingly‚” concludes Molokwane.

Since the tournament started last week‚ the 5th-ranked Proteas have enjoyed a rich vein of form with five wins on the spin against Fiji‚ Trinidad and Tobago‚ Jamaica‚ Scotland and Uganda.

“The Proteas are on a winning streak having won all five matches to make it to the semifinals.

"Telkom is confident that the team will continue this winning streak and players should be rewarded for this performance”‚ said Executive Group Communication at Telkom‚ Mooketsi Mocumi.