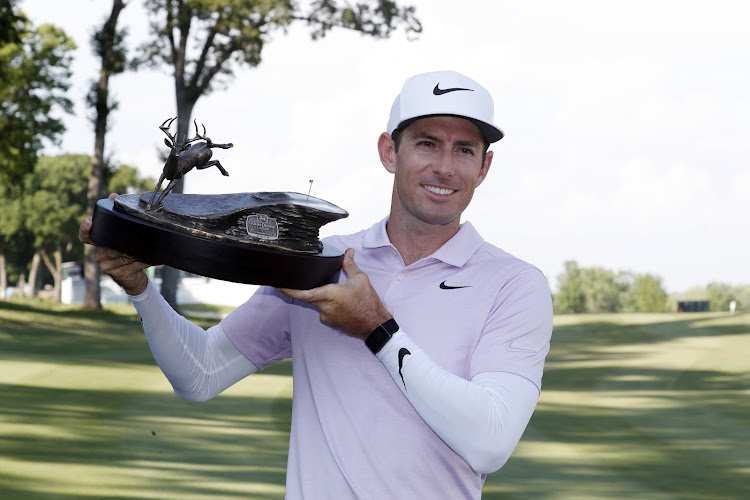 Dylan Frittelli poses with the trophy after winning the John Deere Classic golf tournament at TPC Deere Run at Silvis, Illinois in the US on July 14, 2019.
Image: Brian Spurlock-USA TODAY Sports

South Africa’s Dylan Frittelli claimed his maiden PGA Tour victory on Sunday by winning the John Deere Classic in Illinois after a brilliant final round seven-under 64.

Frittelli‚ 29‚ ended on 21-under par to win by two strokes over America’s Russell Henley thanks to his bogey free round.

Victory earned him a place in this week’s British Open at Royal Portrush in Ireland.

The PGA Tour chartered a jet to take 13 late qualifiers and their caddies to Ireland on Sunday night.

His nerveless display‚ a result of months of work with San Diego-based sports psychologist Jay Brunza‚ allowed Frittelli to free his mind from stresses he admitted had been worrying him in previous weeks.

After battling to earn his PGA Tour card for this year‚ as well as knowing his European Tour exemptions were coming to an end after two victories in 2017‚ Frittelli had a lot on his mind.

But at the John Deere he was able to put those distractions aside.

He started the final round two shots off the lead but birdied the first three holes to make a fast start.

Further birdies at the eighth‚ 10th and 11th piled pressure on the rest of the field and when he birdied the par-five 17th after twice backing away from his drive‚ the job was done.

“Mentality clarity was the difference this week‚” Frittelli said.

“I owe a lot of credit to my sports psych Jay Brunza. We worked on tons of techniques to try and perform the best. I'm not going to give away too many of the techniques‚ but the plan for this week was just to be creative and have fun.

“I’ve been carrying a lot of weight on my shoulders – trying to keep a card in Europe‚ a card here (PGA Tour) and it's so hard not to focus on those outcomes when you're looking at flights and bookings and all that sort of stuff.

“The win definitely clears up all of those thoughts‚ and I'm going to use that as fuel now moving forward to try to push on in the world rankings‚ get back into the top-50 and play all the majors and WGCs that I can.

“That's definitely the biggest goal for me now‚ but the key was just the mindset. I know I have the physical attributes. I know I've got the technique.

“So the fact that I could quiet my mind and just relax and focus on the task at hand‚ it sounds simple‚ but that's pretty much what golf is at the top level.

"If you can block out those distractors or those things that get your emotions going‚ it makes it so much easier.”

The 50-year-old Hall of Famer broke a tie for the lead with a 15-foot putt on the par-four 17th and made a 10-footer on the par-four 18th for a two-under 68 and a two-stroke victory over 65-year-old Jay Haas and Tim Petrovic.

"It's been 10 years since I last won a tournament‚" Goosen said.

"The nerves were there‚ and to have those nerves a little bit again in the last few weeks‚ you know‚ you've just got to put yourself in a position all the time to get used to it again and that's what I've done and it finally paid off this week."