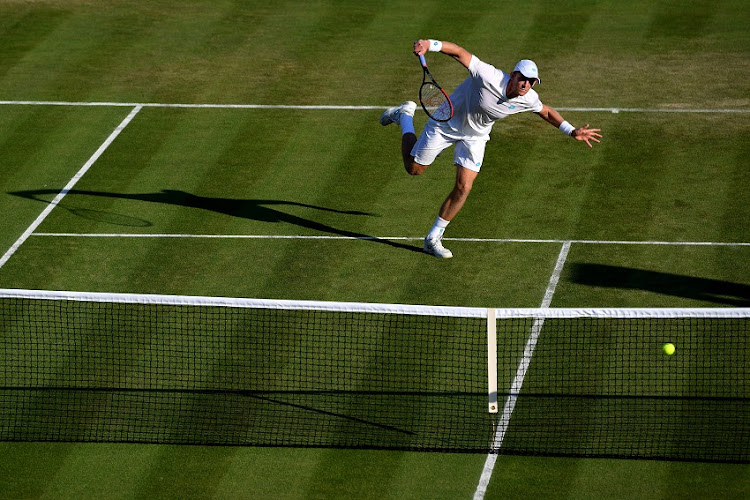 Kevin Anderson of South Africa plays a forehand in his Men's Singles second round match against Janko Tipsarevic of Serbia during Day three of The Championships - Wimbledon 2019 at All England Lawn Tennis and Croquet Club on July 03, 2019 in London, England.
Image: Matthias Hangst/Getty Images

South Africa’s Kevin Anderson powered into the third round of Wimbledon on Wednesday‚ comfortably beating Janko Tipsarevic in four sets.

Anderson‚ the No 4 seed needed a shade under three hours to see off the former top ten player 6-4 6-7 6-1 6-4 as he continued his quiet progress on the smaller show courts at SW19.

Unsurprisingly it was Anderson’s massive serve that did he damage as he fired down 24 aces in the match‚ but the 2.08m South African is a superb all-round player these days.

While his serve did it’s job‚ reducing to Tipsarevic to a single break point in the match‚ which he failed to convert‚ Anderson also hit 57 winners against 34 unforced errors.

The 33-year-old also displayed variation as he came to the net frequently and with success‚ winning 25 of 31 points that way.

Playing only his 13th match of the year because of a nagging elbow injury that kept him off circuit for 10 weeks‚ Anderson showed no ill-effects of the injury.

Afterwards Anderson revealed that he was happy with his health as he eyes a third round clash against No 26 seed Guido Pella from Argentina.

"It's definitely getting better‚" Anderson said of his elbow.

"I think it's a process‚ but having played four sets and feeling really good and a match a few days ago‚ that's a very positive sign for me today.

"I thought I served well throughout‚ not getting broken. I did a great job on my serve games.

"Of course I'm really pleased with how my body held up. That's the most important thing right now for me. Obviously the more I can keep playing matches‚ the better it will be."