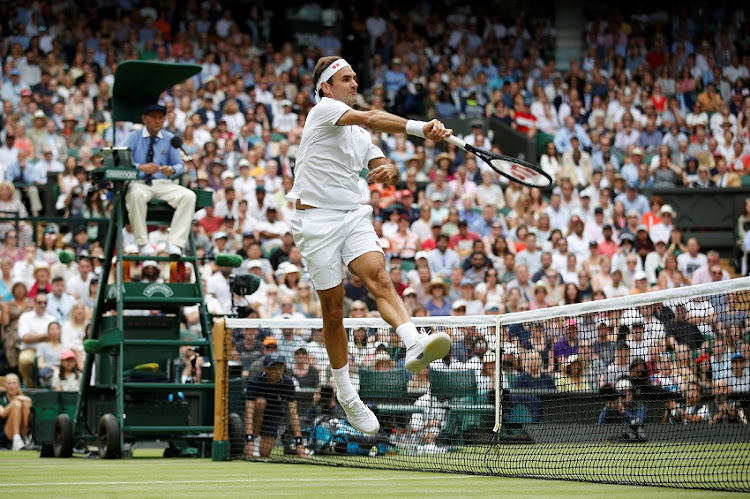 South Africa’s Lloyd Harris was in dreamland for 30 minutes of his Wimbledon debut against Roger Federer on Centre Court before the Swiss maestro predictably took control to win their first round clash on Tuesday.

Harris‚ 22 from Sea Point in Cape Town ‚ took the first set 6-3 against his boyhood idol with a nerveless start to the match against the eight-time Wimbledon champion. It was the first time since 2010 Federer had dropped a set in the first round at Wimbledon.

By winning the first set‚ Harris reduced Federer to his fourth consecutive dropped set against South Africans after Kevin Anderson took the final three sets off the Swiss in last year’s quarterfinal.

Federer‚ in his 21st appearance at Wimbledon‚ struggled with the 1.90m South African’s heavy hitting in the first set‚ saying afterwards it ‘felt heavy’.

"I struggled early on‚ I felt a bit frozen‚ my legs weren't going‚" Federer said afterwards.

"He kept me nervous for a set and a half and I think that break was crucial in the second to turn things around. It took a big effort. Lloyd played a good match."

Harris‚ playing only his seventh competitive match on grass‚ unsurprisingly succumbed as the match wore on against a man who has played over 100 matches at Wimbledon alone.

The 37-year-old hasn’t won 20 career Grand Slams without the ability to shake off difficult patches in matches and he quickly bounced back by breaking Harris in the fourth game of second set. It was the first time the Swiss nosed ahead and it was the last look-in Harris had.

The game Capetonian also called for a medical timeout at the end of the third set because of a left calf muscle injury.

By then he was two sets to one down as Federer turned the screw with some precision hitting and stunning volleying.

In all Federer won 29 of 31 points at the net. Harris simply couldn’t find a way past the Swiss‚ who must have looked like an Alp to the youngster every time he tried to pass.

Although in professional tennis terms Federer is a geriatric‚ his reflexes at the net were snake-like while he fired groundstrokes with deceptive power‚ which had Harris scampering at times.

Federer’s serve also improved as the match wore on with nine aces in total versus Harris’s five. Federer won 80% of his first serve points while Harris could only manage 63%.

The Swiss was also rock solid on his second serve‚ winning 79% of points behind it compared to Harris’ 45%.

Still‚ the South African world No 86‚ playing in only his third Grand Slam‚ was expected to be roll over as most of Federer’s first round opponents at Wimbledon have done for the better part of two decades.

Harris though‚ despite only setting foot on Centre Court for the first time an hour before all play for the day started‚ was unfazed by the surroundings.

He struck the ball purely from the outset and troubled Federer with his powerful groundstrokes. With nothing to lose Harris played with freedom.

But a combination of a sudden prospect of causing an upset after winning the first set‚ coupled with Federer’s improvement and a nagging calf strain saw Harris’ high standards drop.

It was a wonderful occasion for the youngster and a career highlight‚ which earned him R820000‚ but it was hopefully also a step to something bigger down the road.