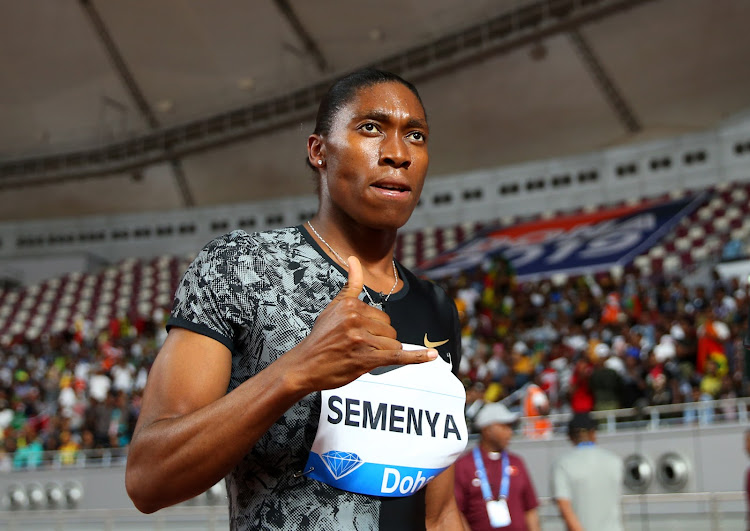 Caster Semenya of South Africa celebrates winning the Women's 800 metres during the IAAF Diamond League event at the Khalifa International Stadium on May 03, 2019 in Doha, Qatar.
Image: Francois Nel/Getty Images

Caster Semenya has launched another stinging attack on the IAAF‚ this time based on the arbitral award by the Court of Arbitration for Sport (CAS) in Switzerland.

A redacted‚ 162-page version of the CAS judgment handed down on May 1 was published on Tuesday.

CAS ruled in favour of the IAAF‚ the sport’s world governing body‚ allowing it to implement its regulations for female eligibility‚ which would require women to lower their naturally occurring high levels of testosterone to compete in certain events.

Semenya has appealed to the Federal Supreme Court in Switzerland‚ which has ordered the IAAF to temporarily suspend the regulations for Semenya.

The statement issued on Semenya’s behalf said the IAAF’s behaviour showed it was the opposite of what the CAS perceived as a sympathetic‚ bona fide approach to the treatment of female athletes that was ‘of crucial relevance to the panel’.”

Semenya‚ who had to take oral contraceptives to lower her testosterone when she competed from 2010 to 2015‚ reiterated her stance that she would not take medication this time.

“The IAAF used me in the past as a human guinea pig to experiment with how the medication they required me to take would affect my testosterone levels‚” she said in a statement issued on her behalf.

“Even though the hormonal drugs made me feel constantly sick‚ the IAAF now wants to enforce even stricter thresholds with unknown health consequences.

“I will not allow the IAAF to use me and my body again. But I am concerned that other female athletes will feel compelled to let the IAAF drug them and test the effectiveness and negative health effects of different hormonal drugs.

“This cannot be allowed to happen.”

The statement on behalf of Semenya ran through the CAS award and argued that the IAAF was already failing in the mandate entrusted to it.

In the award‚ CAS states that Semenya is a woman‚ but a statement issued on behalf of the athlete accused the IAAF‚ the sport’s world governing body‚ of taking it upon itself “to decide who is‚ and who is not‚ woman enough in the eyes of the IAAF‚ and to discriminate on that basis”.

“While the IAAF publicly claims that it is not engaged in sex testing‚ the CAS award makes it clear that the IAAF is doing exactly that.

“The award reveals that Dr Stephane Bermon‚ the IAAF’s director of health and science‚ admitted that the IAAF’s regulations [on female eligibility] ‘were judging the biological sex of women with DSD (differences of sex development)’.

“The IAAF’s regulations are thus the most recent in a long chain of sex-testing rules that have plagued women’s sport for decades and caused profound harm to women athletes. The IAAF’s view of what it means to be a woman is deeply flawed.”

The statement described as “highly controversial” the CAS decision that Semenya and other female athletes affected by the regulations had a significant natural performance advantage over other women in certain disciplines.

It further pointed out that the CAS panel had found “it was mere speculation that there was any competitive advantage in the 1500m and one-mile races”.

“The CAS panel also found‚ and the IAAF admitted‚ that the performance of [Semenya] and other female athletes falling under the regulations does not reach that of elite male athletes.”

The statement also focused on the CAS panel’s admission that the IAAF regulations were discriminatory‚ although two of the panel found “this discrimination to be proportionate” on the assumption that women athletes could comply with the regulations by taking oral contraceptives.

CAS expressed its concern that oral contraceptives may not be suitable for all competitors to ensure compliance.

“The CAS expressed‚ not less than four times‚ its concern‚ or even ‘grave concerns’‚ over female athletes’ ‘potential inability to remain in compliance with the … regulations’.

“Such a repeated expression of concerns is unprecedented and the CAS ‘strongly encourages the IAAF to address the panel’s concerns’ and warned of the possibility that‚ when more evidence emerges as the IAAF implements its regulations‚ the proportionality of the regulations may need to be reassessed.”

The statement said the IAAF’s reactions after the award “confirms that it does not deserve the trust that the majority of the CAS placed in it”.

“The IAAF ignored the CAS’s concerns and suggestions and maintained the regulations for the one mile and 1500m events.

“The IAAF then issued an aggressive public statement on June 4 in which it spoke of female athletes’ ‘chosen legal sex and/or gender identity’ and the ‘right to self-identity into a competition or an event’‚ which is an insult to women like Caster who were born as women and have always been women.”