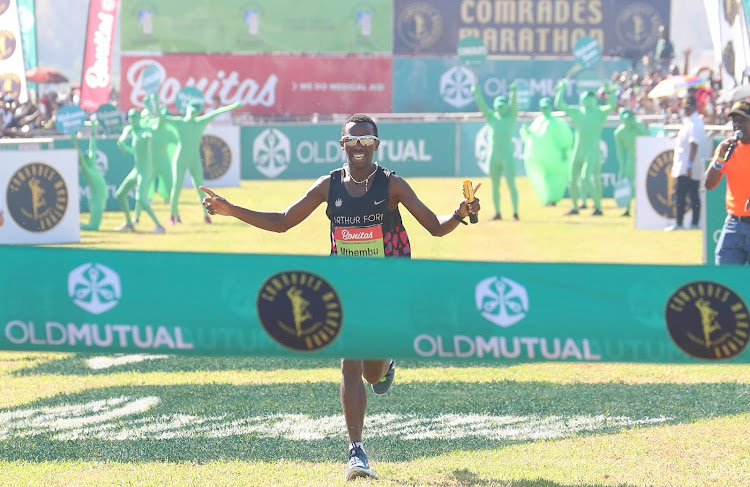 Bong’musa Mthembu will have a tough task defending his hard-earned up-run title from two years ago, especially after he won the Two Oceans Marathon quite recently.
Image: Anesh Debiky/Gallo Images

While all eyes are deservedly on the Comrades Marathon up-run defending champion Bong'musa Mthembu‚ winning the race is easier said than done.

Mthembu's not just the defending up-run champion from 2017‚ but he's also eyeing a Comrades hat-trick and a fourth title having also won last year's down-run and the 2014 trek from Pietermaritzburg to Durban.

Nyamande considered himself unfortunate to finish second behind Mthembu in the 2017 up-run.

That was a well-timed and well-run race by Mthembu that left his competitors without much of a response.

A three-minute gap‚ the one Mthembu won by two years ago‚ is a big one but the jury is out on him‚ especially with the quest for the Two Oceans/Comrades double having won the former race during the Easter Weekend.

The time of 5.38.48 was enough to get Nyamande into second place two years ago‚ but what was adequate two years ago may not be enough this year.

Nyamande was third in 2015‚ which could be a good omen for him in terms of going one better on Sunday.

Kelehe knows how to win the up-run‚ having done so back in 2015.

Whether he can do it again this year is another story‚ as a third place finish in 2017 didn't do justice to how well he ran.

However‚ that was 24 months back and he was two years younger‚ even though the Comrades has shown through the years that it's a race for both the old and the young.

His winning time of 5.38.36 four years ago wouldn't have been fast enough to beat Mthembu in 2017 and his 5.41.48 was a relatively slow time even though he came third.

The race's showman has managed an incredible level of consistency without actually adding to his 2012 down-run win.

He always seems to pace the up-run very well but never quite has the final kick of the likes of Kelehe and Mthembu to see out the race.

He was fourth in the 2017 race in a time of 5.42.40 but two years earlier‚ didn't finish in the gold or silver medal positions.

He's another runner who desperately wants to shrug off the “down-run” specialist tag. However‚ it won't be an easy task for him.

The down-run record holder is difficult to leave out of any Comrades conversation.

However‚ he hasn't quite distinguished himself in the up-run.

Pace and power are his credentials but his endurance will have to come to the fore.

He came second behind Mthembu at the Two Oceans with a time of 3.10.29 but a six-hour run or less should he his goal.

He remains a dark-horse nonetheless.