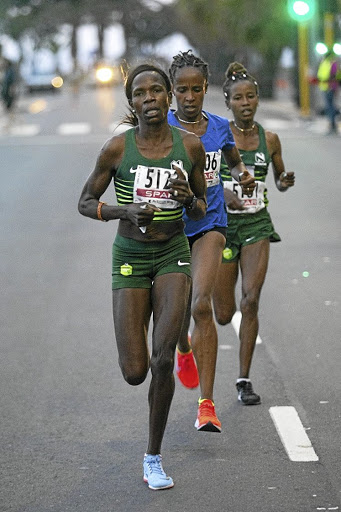 Namibian speedster Helalia Johannes made light work of SA athletes and put herself in a commanding position to win the Spar Grand Prix after claiming her second series victory in Cape Town yesterday.

Having won the opening leg in Port Elizabeth early this month, Johannes lived up to expectations by running an impressive 31:45 in cosy weather conditions in the Mother City. It was the second race of six in the Spar Women's Challenge 10km series.

While she was somewhat reluctant to weigh in on her chances of going all the way and winning the grand prize, Johannes felt the pleasant weather conditions aided her.

"I don't know what will happen tomorrow, am focusing on today, so I cannot talk about winning the Grand Prix. The weather was perfect... it allowed me to perform to my level best," said Johannes, who also won marathon gold at last year's Commonwealth Games on Australia's Gold Coast.

It was at the halfway mark when Johannes pulled away from her rivals, showing Nedbank teammate and runner-up Sofia Chegen (Ethiopia), who recorded 32:09, a clean pair of heels.

"When the race started, I made sure I stayed in touch with the chasing pack.

"After 5km, I broke away. What worked for me is that I never allowed other runners to break away from me as we were in the leading group," an elated Johannes said.

She will be a firm favourite in Durban's meet, the third leg, on June 23.

Tadu Nare from Kenya clinched the third spot by crossing the line some 47 seconds behind Chegen, while SA veteran Irvette van Zyl was seventh in 33:49.

Johannes leads with 30 points
Sport
3 years ago
Next Article