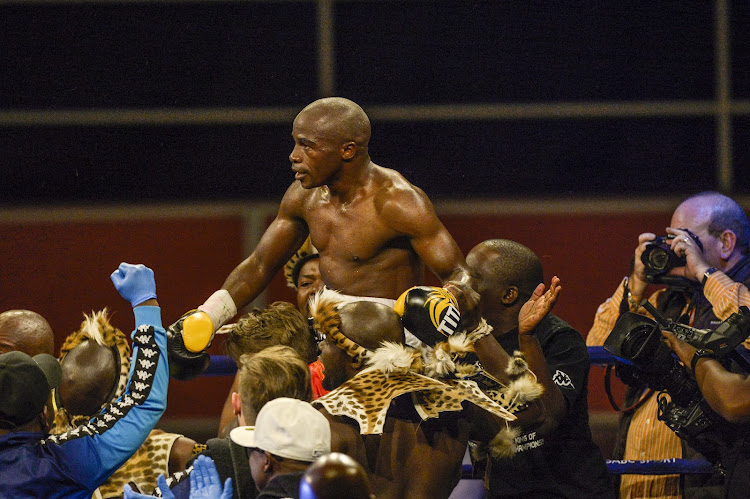 Moruti Mthalane was taken the distance for the first time as IBF flyweight champion‚ but he transformed the face of mandatory challenger Masayuki Kuroda into a bloody mess in Tokyo on Monday.

The three judges scored it unanimously for 36-year-old Mthalane‚ now in his second reign as the titleholder.

Only Masayuki will know how he stayed on his feet throughout the massacre‚ and by the final bell his right eye was closed and his left a fountain of blood.

The face of Mthalane‚ by comparison‚ was almost unmarked.

But the South African had to sustain an early attack in a war of attrition to ensure the fight went his way.

Mthalane ate a fair bit of leather in the early exchanges‚ but he also caught a lot of the challenger’s punches on his gloves and arms‚ which are not scoring areas.

Mthalane took two rounds to establish the distance‚ after which he won the battle of the jab‚ landing first and slipping his taller opponent’s lead left.

Kuroda attacked the body frequently while Mthalane retaliated with a relentless hunt for the head.

Round after round Mthalane sniped his shots into the target area while also letting the challenger waste his power throwing punches that did little except excite the partisan vocal crowd.

By late in the fifth round Mthalane rocked the Japanese fighter with a right-left combination that set the tone for the rest of the bout.

Mthalane found the mark so often it seemed as if his gloves contained homing devices programmed to land on Kuroda’s head.

The challenger was arguably rescued by the intervention of American referee Mark Nelson twice in the 11th‚ when he briefly halted Mthalane’s attacks because the tape on the challenger’s gloves had come loose.

In his first tenure as champion from 2009 to 2013‚ Mthalane made four defences of the IBF belt‚ which was stripped from for inactivity after he refused to accept a paltry offer for a defence.

This was the second defence of his second reign.

Next up could be a unification bout.