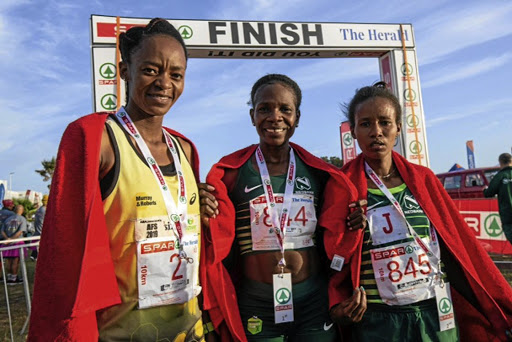 There are new names at the top of the Spar Grand Prix leaderboard after the first Women's 10km Challenge race in Port Elizabeth last weekend.

Namibian running sensation Helalia Johannes (Nedbank) won the race in 31.50 minutes - the fastest time ever in a women's race in the Friendly City. She tops the leaderboard with 30 points.

The first six runners all earned bonus points for running faster than the winning time of 33.45 last year.

Another Challenge debutante, Ethiopian Tadu Teshome Nare (Nedbank), is second on the log, with 29 points, followed by the 2017 winner, Free State's Kesa Molotsane (Murray & Roberts), who has 28 points.

The top 20 runners in the six 10km Women's Challenge races earn Grand Prix points according to where they come in each of the races.

Bonus points are earned by beating the time set in the previous race. Last year, the only person to earn bonus points was Van Zyl, who earned bonus points with her emphatic victory in the Joburg Challenge, just weeks after giving birth to her second son.

The age categories, Bulelwa Simae (Nedbank) tops the 40-49 leaderboard, with five points. Comrades Marathon gold medallist Grace de Oliviera (Boxer) is the leader in the 50-59 category, while Margie Saunders (Nedbank) is top of the 60+ category.