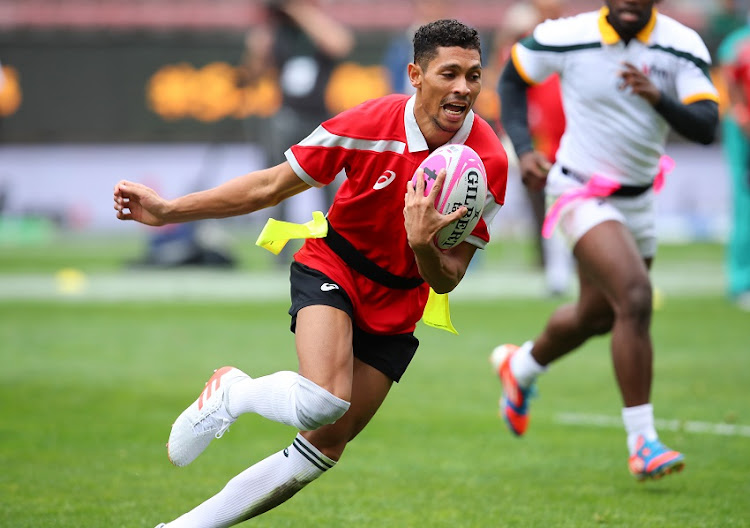 Wayde van Niekerk during the Celebrity TAG match between the Aden Thomas All Stars and the Carl Wastie Invitational side, the curtain-raiser to the Castle Lager Rugby Championship Test between the South Africa and New Zealand at DHL Newlands October 07, 2017 in Cape Town, South Africa.
Image: Roger Sedres/ImageSA/Gallo Images

Fans hoping to see Wayde van Niekerk make his real comeback from a lengthy knee injury might have to wait until July.

But it could be as early as late May‚ theoretically.

Van Niekerk had a couple of low-key track races in Bloemfontein in February‚ but said afterwards he would show he was back from his lengthy knee injury only at his proper comeback.

He had been scheduled to compete at the SA championships in Germiston last week‚ but he withdrew before the 400m heats as a precaution after his reconstructed right knee felt “a bit tight and uncomfortable” after a few days of chilly weather.

“There’s a long year waiting for me and I want to make sure internationally I compete‚” said Van Niekerk‚ who wasn't expected to unleash anything special had he run.

The world championships in Doha are happening late in the season — much later than usual‚ from late September into October — and there’s still plenty of time for the Olympic and two-time world champion to find his racing legs.

“We have set out somewhat of a plan and a schedule for myself for the year. So the plan is really to just try and have somewhat of a schedule‚ but it’s not something that’s fixed or something we’ve committed to‚” said Van Niekerk.

“I don’t want to go out there laying out dates and scheduling something in public and then I disappoint. I just want to make sure I’m in my best shape when that day comes.”

So when is that likely to be?

Van Niekerk and coach Ans Botha are scheduled to fly out of SA to their Italian training camp in Gemona on May 24‚ and it’s highly unlikely that he’ll pop overseas to compete before then.

There are five Diamond League meets between his arrival in Europe and the end of June‚ but only two offer men’s 400m races — Stockholm on May 30 and Prefontaine in the US on June 30.

Venturing into Scandinavia because of the potential cold could deter him‚ although the temperature hit 26 degrees last year and a few SA athletes are scheduled to compete there.

Van Niekerk is excluded from the Nike-backed American meet because he’s contracted to rival adidas.

The adidas Boost Boston Games on June 16 is also not likely because for one there’s no 400m‚ and secondly the racing is on a raised track.

The World Challenge schedule offers him a few opportunities‚ with the June 9 FBK Games in Hengelo and the June 20 Golden Spike in Ostrava where retired sprint great Usain Bolt kicked off a few of his European campaigns in latter years.

The Paavo Nurmi Games in Finland on June 11 are probably not likely to lure Van Niekerk.

Equally‚ he could choose a low-key meet to return‚ like the annual meet on July 9 at Lignano Sabbiadoro‚ a short drive from his training base where Oscar Pistorius clocked his 400m personal best in 2011.

Van Niekerk has already qualified for the world championships‚ his world title from London 2017 securing him a wild card.

If he really wanted to‚ he could choose to compete only at the world championships‚ with the men’s 400m heats scheduled to start at 4.35pm on October 1 (his selection by Athletics SA shouldn't be a problem).

But Van Niekerk knows he will need to be at his best if he wants to win a third consecutive 400m crown at the world championships — 21-year-old American Michael Norman went 43.45sec over the Easter weekend to join countryman Jeremy Wariner as the fourth-fastest of all time.

Any bets on Van Niekerk’s return? Somewhere between May 30 and October 1 should be safe.