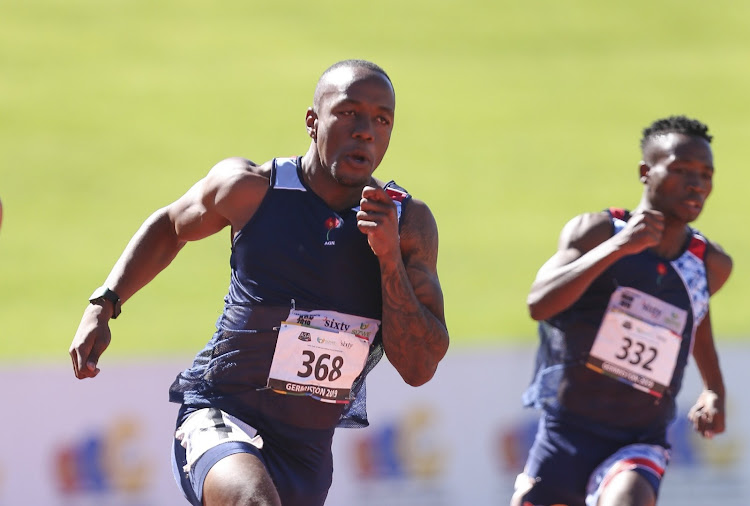 Akani Simbine of AGN in the heats of the men's 200m during Day 2 of the Sizwe Medical Fund & 3SixtyLife ASA Senior Track & Field and Combined Events Championships at the Germiston Athletics Stadium on April 26, 2019 in Johannesburg.
Image: Roger Sedres

Akani Simbine cruised through the 200m heats and semifinals on Friday to take top-billing ahead of Saturday’s final at the SA championships in Germiston.

In finals action on the penultimate day of the national showpiece, Caster Semenya easily added the 1,500m crown to her 5,000m title and Ryan Mphahlele delivered a storming final lap to claim victory in the men’s 1500m.

But the longest-standing dynasty in SA athletics, belonging to 45-year-old hammer-thrower Chris Harmse, was finally ended after 23 years as by 23-year-old Tshepang Makhete triumphed by a margin of 55cm.

The men’s 200m was always going to be the flagship event of the championships with a star-studded line-up. However, two of the main contenders fell out of the reckoning.

Defending champion Luxolo Adams got disqualified for a false start in the semifinals, and Clarence Munyai, holder of 19.69sec 200m SA record and the fastest of the morning heats with an easy 20.77, pulled out before the semifinals as a precaution to protect a tight hamstring tendon.

Simbine looked comfortable as he raced to 20.51, the best time of the semifinals.

“Even with the top guys that are out, the guys that are still in can put up a good fight for themselves and make us run faster so I’m really keen to see what the guys have in store for me tomorrow.”

But experience-wise the man he’ll be watching is 2015 world championship bronze medallist Anaso Jobodwana, winner of the slowest semifinal in 21.17.

Jobodwana, still struggling to find his form of four years ago, was all smiles after his race, where he turned and smiled at runner-up Duke Kuali on the home straight.

“I’m happy with it. I can go faster, but I’m not where I should be, honestly,” said US-based Jobodwana.

“This is like my first good race actually, because I ran two races before this to see where I was at and I was like really struggling so I put together that second half — that’s the half I’ve been trying to work on. It’s coming together.”

“The time will come. It’s still April. Tomorrow is just about competing with these guys and trying to go with a medal.”

He believes Simbine is the favourite.

Simbine, who will run his first 100m of the season only next month, played down the tag.

“The 200m is not my main event, I’m always learning how to run it,” said Simbine, who boasts a 19.95 personal best in the longer sprint.

“I’m looking forward to the final.”

Also of major interest on Saturday will be the men’s long-jump final featuring Luvo Manyonga, Ruswahl Samaai and Zarck Visser.