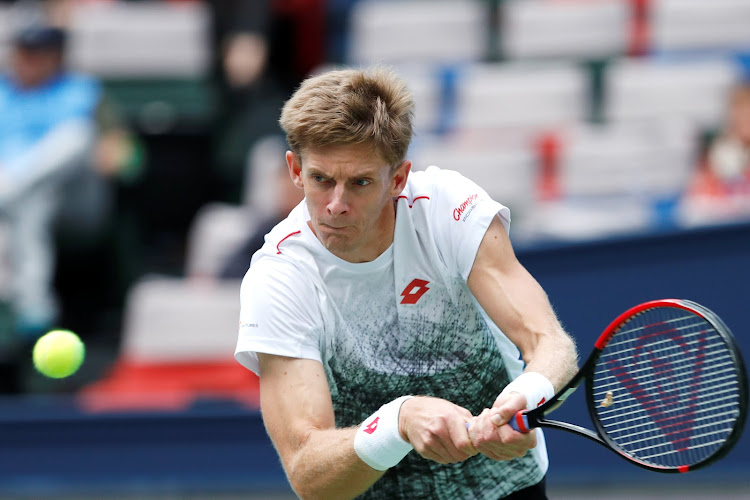 Kevin Anderson of South Africa in action against Novak Djokovic of Serbia during the Shanghai Masters, in Shanghai, China, on October 12, 2018.
Image: REUTERS/Aly Song

The next time South Africans will see world number six Kevin Anderson on court could be at the Queens Club in London in June.

Anderson‚ 32‚ has cancelled participation in the entire clay court season to address an ongoing elbow injury that has plagued his 2019 campaign after a superb 2018.

Anderson revealed the news via his social media channels.

“I wanted to let you all know that I will unfortunately be missing the clay season this year‚” Anderson said.

“After discussing with my doctors and team‚ we thought the best decision is to rest and rehab my elbow injury for a few more week. I will keep working hard each day to get healthy again in time for grass.”

Anderson famously made the Wimbledon final last year after upsetting Roger Federer in the quarterfinals and winning an epic six-and-a-half hour semi-final against John Isner.

An exhausted Anderson eventually succumbed to Novak Djokovic in the final.

The elbow injury has hindered Anderson all season and limited him to just 10 competitive matches over three tournaments.

Anderson started the season well‚ winning the Tata Open in India in January before a shock second round loss against Frances Tiafoe as the Australian Open later that month.

He then reached the quarterfinals in the ATP 1000 tournament in Miami last month before losing to Federer. So far Anderson has won eight of 10 matches this season.

“I know this is the right decision for the long-term in the career‚” Anderson said of not competing on clay in 2019. “I will also miss seeing the fans there‚ but I appreciate all of your support and look forward to seeing you again soon.”

Anderson was scheduled to compete in Estoril‚ Madrid‚ Rome and Roland Garros. In 2018‚ he made the semi-finals in Madrid and the fourth round at Roland Garros.