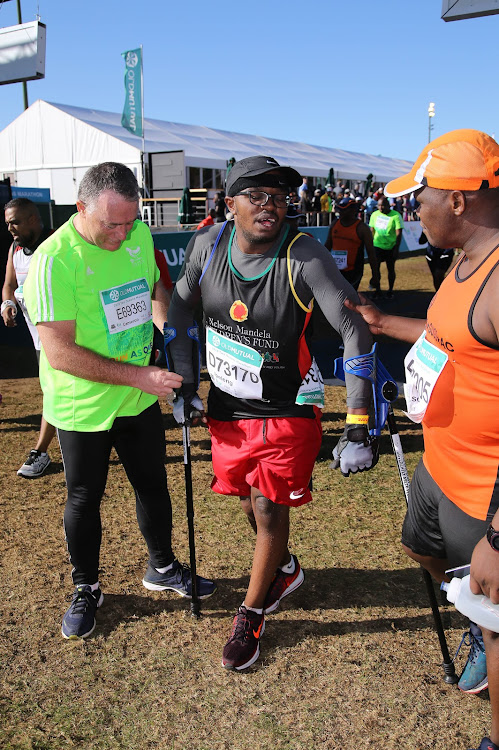 Ipeleng Khunou was born with an illness that impacts his balance but this has not held the inspirational athlete back and he will continue to defy the odds when he participates in the annual Two Oceans Marathon in Cape Town on Saturday.

The 31-year-old from Rustenburg competed and finished the 21 km half-marathon on crutches last year and is returning this year to raise awareness about his condition‚ and to also raise funds for children struggling with disabilities.

Known as ‘The Crutch Runner’‚ Khunou was born with a rare brain illness called septo-optic dysplasia which causes loss of balance and also affects eyesight. But he has not allowed this to hold him back.

He said the most important part of making this happen is not only staying committed to his training but also working with organisations that are aligned with his goals.

“I believe in running for a purpose and I want to work with companies that don’t just believe in me as an individual but support athletes and people from all kinds of backgrounds and abilities.

‘‘That’s why I joined the Nedbank Running Club. It is more than just a club‚ athletes of all kinds are welcome and supported.” he said.

‘‘Our purpose as Nedbank Running Club is providing a platform for all people interested in road running to participate regardless of their skill level.

‘‘We encourage our members to participate in our various regular running activities across the country. Ours is to ensure that all runners are supported in their quest to run their best race.

“Ipeleng is one of the people whose values are a great match with ours as a club‚ he runs to give back to the community and we are proud to support an athlete like him.”

He plans to finish the Two Oceans race again this year in his Nedbank Green‚ all for his fund-raising efforts.

“My dream is for the sports world to include a crutch-running category‚” he said.

‘‘I want to be able to compete in as many races as possible‚ continue to raise awareness and running for a purpose.

‘‘At the moment‚ I’m working on running my best time at the Two Oceans Marathon.”

Khunou will be donning the Nedbank green along with strong elite men’s and women’s teams as well as over 800 Nedbank Club members representing 15 different Nedbank Running Clubs based in South Africa‚ Lesotho‚ Zimbabwe‚ Kenya and Ethiopia.

Khunou s’ running career started when he found himself weighing 120kgs and he took up the sport to shed the weight.

“I was overweight and I got to a point where I could no longer allow myself to be that way‚” he said.

‘‘On my first run I went out at 4am in the morning because I couldn’t bear being seen.

‘‘Road running wasn’t easy but after a while I started to enjoy the challenge.

‘‘I was determined to change and a year later I had lost 40kg and completed in the Om Die Dam 10km race. After this I knew my life had changed forever.”