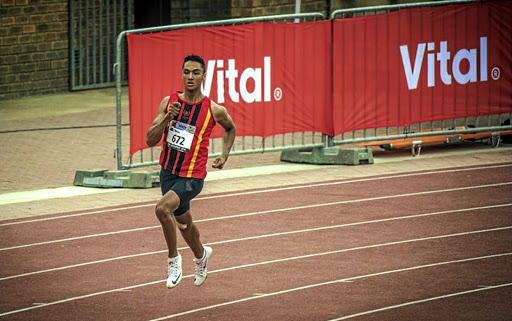 Lythe Pillay shows the sprinting form that has made him the new junior 400m national champion. /TOBIAS GINSBERG

Pillay, 16, is undoubtedly among the country's promising sprinters with attributes to follow in the footsteps of Van Niekerk, the 400m world record holder with the time of 43.03 seconds at the 2016 Rio Olympics in Brazil.

The Benoni-born, East Rand prospect exhibited his potential to be the next big thing in this discipline by clocking 46.52 seconds to clinch the 400m national youth title at the Athletic SA (ASA) Youth and Junior Championships in Paarl, Western Cape, a fortnight ago.

"I would not say I started doing 400m because of Wayde, but I started at more or less time when he ran it. I remember in grade seven I went to kids' grand prix, I ran my first 400 just by chance. I ran it in one minute, eighteen seconds,'' Pillay reflected.

"At the time I was still doing 100 and 200m and a bit of hurdles. I thought maybe the 400m would help me for my 200 endurance. I started enjoying it, since then I have fallen in love with it. After Wayde broke the world record I felt more inspired.''

Wayde van Niekerk still experiences pain in his reconstructed right knee and he doesn’t know when he will regain his all-conquering form‚ but the ...
Sport
2 years ago

Van Niekerk may be one of the reasons Pillay ventured into 400m, but the grade 10 pupil at the King Edward VII School in Houghton, Joburg, isn't too focused on emulating his idol.

"I always try not to think about emulating Wayde. Yes, he's one of my idols, but whenever I step on the track I always bring that enjoyment I have for athletics and running, it's never about winning or getting praised,'' Pillay insisted.

Among his achievements, Pillay smashed the SA 400m U15 record with a scintillating time of 46.76 seconds at the Interprovincial Championships in Potchefstroom late last year.

He has also made the 61-member team to represent SA at the CAA African U18 Youth and U20 Junior Championships in Abidjan, Ivory Coast from April 16-20.