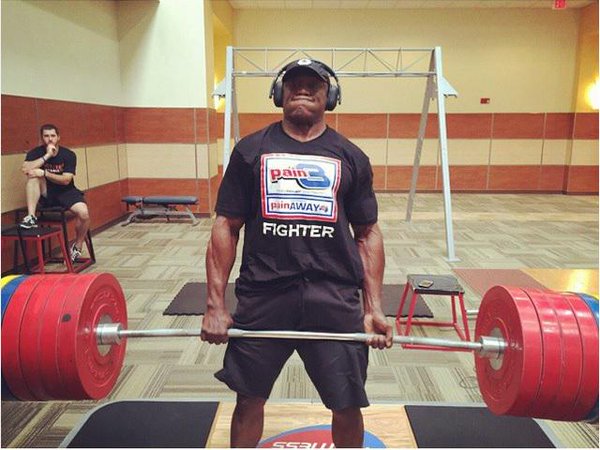 He may be one of the most physically imposing wrestlers on the WWE roster but Intercontinental champion Bobby Lashley is also one of the nicest guys around.

Given his tall and muscular frame‚ Lashley was the hardest man to miss at the Hard Rock Cafe in Times Square‚ New York‚ this week and quickly took over the room as soon as he walked in with sidekick Lio Rush.

But his smile quickly disarmed any misconceptions anyone might have had about him as he effortlessly interacted with everyone in the room‚ occasionally taking the time to pose for selfies.

The fight for the Intercontinental championship will be one of the main attractions at Wrestlemania 35 at Metlife Stadium‚ New Jersey‚ on Sunday as the 42-year-old Lashley faces the intriguing Finn Balor in one of the most fascinating match-ups at the biggest WWE event of the year.

He said he has continued to follow his trusted training routine as he prepared for the fight‚ training hard but short.

“Training for wrestling now is a lot different you know‚ it's not that bodybuilder style training that it looks [like]‚” he said.

“Even though I look like I have more of a bodybuilding frame‚ that's just because of my diet. But for me‚ I train hard and I train short.

“I try to mix it up a little bit. So when I took time off [from the WWE in 2008]‚ I took a whole lot of strength and conditioning.”

So what kind of diet does a man of his size follow?

“I just eat‚” he said with a chuckle.

“I eat all the time.

“I'm a firm believer of not putting myself through these kinds of weird diets that everybody talks about.

“The fasting‚ the checking this‚ the checking that.... At the end of the day‚ nobody wants to sit down with a calculator and say 'alright I'm eating this' and always have to formulate.

“I get to a point where my body likes certain things and I give my body what it wants. Certain things just don't bode well with the body.

“You have to understand your body. People say 'why can't you eat doughnut?'

“There’s a reaction that your body has when you put in a lot of sugar. I just don't like it so much.

“So I eat clean but it’s not because I’m trying to follow any kind of diet.

“It’s just because I’m trying to put in the fuel that my body needs. I always look at it like if you have a Ferrari‚ you are not going to put bad gas in a Ferrari.

“Right now I consider my body a Ferrari. So I am going to put good stuff in my body as much as possible.”

Finn and Lashley have developed a fascinating rivalry and the former won the selfsame Intercontinental title at Elimination Chamber in February after pinning Rush in a two against one handicap match.

Finn lost the title a month later at Fastlane in a singles match-up when Rush helped Lashley to regain the silverware.

The return of the Balor's Demon King persona at Wrestlemania should add further spice to this match on Sunday.