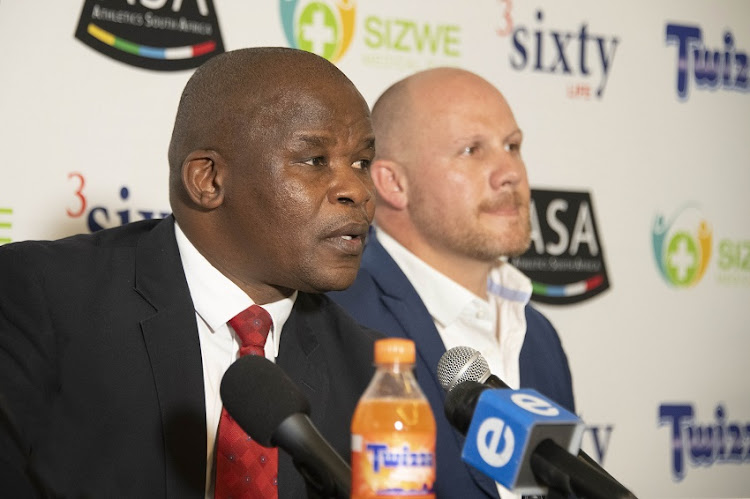 Athletics SA (ASA) on Tuesday unveiled five sponsors for its flagship national senior championships in Germiston next month‚ a move they say will lift the overall quality of the event.

Title sponsors‚ medical aid company Sizwe Medical Fund and insurance company 3SixtyLife‚ would also be involved in the SA under-20 and under-18 championships which will be staged under the banner of cold-drinks company Twizza.

The senior championships — which ASA president Aleck Skhosana said were compulsory for all athletes wanting to compete at the world championships in Doha later this year — will be staged in Germiston from April 25-27. The age-group competition is in Paarl on March 26 and 27.

“It’s exciting to have fresh‚ new partners‚” said Michael Meyer‚ managing director of Stillwater Sports‚ which arranged the sponsorships on behalf of ASA.

He said the sponsorships‚ which also include adidas‚ Rhodes Foods and Vital Health Foods for both championships‚ would ensure athletes are treated professionally.

“I’ll never forget that image of going to Paarl for SA juniors last year‚ sitting under a gazebo there and sand’s blowing.

“I remember going to the SA seniors at Stellenbosch a few years ago and it was midway through the afternoon and Caster was obviously running a few events and there she was lying under a tree in the shade between events and I thought this is a world-class athlete.

“So what we’re trying to do is just make sure athletes are treated professionally‚ coaches‚ spectators and even officials.

“That takes a lot of investment.”

Skhosana‚ saying the title sponsorships were for three years‚ warned athletes they would have to compete in all rounds to make themselves eligible for the national team.

That rule was brought in after last year’s championships where some of the athletes withdrew after the semifinals.

“Let me also say‚ you will be an athlete on our team if you run through all rounds. You run your 100m heat‚ you run your semifinal and you run your final. You can not be able to run and stop and all that.”

But a replacement sponsor for the Athletix Grand Series has not yet been secured.

A three-meet series was sponsored by Liquid Telecom last year‚ but after they withdrew‚ the 2019 series will comprise two meets‚ in Bloemfontein on April 13 and in Potchefstroom on April 18.