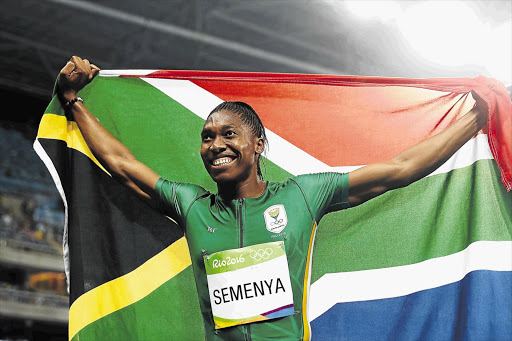 International sports luminaries such as Serena Williams, Billie-Jean King and Martina Navratilova have come out against the IAAF's bid to introduce drug-controlled testosterone limits for women athletes such as Caster Semenya. File photo.
Image: GETTY IMAGES

MPs from across the political spectrum have put their differences aside in all-round condemnation of the International Association of Athletics Federations' (IAAF's) bid to force star athlete Caster Semenya to take substances to lower her testosterone levels.

The MPs, dressed in government-sponsored black T-shirts engraved with words such as "we condemn subtle hatred and racism", in the national assembly were reacting to a statement by sports minister Tokozile Xasa in which she asked the country's MPs to back her campaign against the IAAF's attempt to medically reduce Semenya's competitiveness.

Xasa recently led a high-powered delegation at the Court of Arbitration for Sport in Switzerland in a government-led mission to oppose the IAAF's proposed regulation to limit testosterone levels of the female athlete.

The court is expected to deliver its judgment on the matter towards the end of March.

Xasa told MPs that it was suspicious that the IAAF's proposed regulations targeted athletics races in which Semenya has proved dominant - such as the 400m, 800m and 1,500m events.

"Our analysis indicates that these regulations are targeted at the sub-codes of athletics in which African athletes participate and are dominant in. These include applicability to the 400m, 800m and 1,500m races.

"We do not believe that it's a coincidence that these are the races in which Caster Semenya participates and generally dominates. We believe the regulations were designed to exclude her from participation and formulated purposefully to be discriminatory against her. Left unopposed and unattended, they have the potential to deprive the world from seeing and experiencing the full participation of future athletes to come."

Young, courageous athlete has retained her dignity in the face of persecution for just being different.
Opinion
3 years ago

Xasa said international sport luminaries such as Serena Williams and Martina Navratilova have also come out against the IAAF's bid to introduce drug-controlled testosterone limits.

"We therefore call upon all members of this house to be on the right side of history. We urge all of us as representatives of the people of South Africa to openly declare to the whole world to know that we are Caster and Caster is us. We urge all political parties to endorse the campaign #Naturallysuperior and to continue to lobby the world to stand firm against these regulations."

And the political parties did not waste their time in rallying around Semenya.

The DA's Darren Bergman said the IAAF's proposed rules were an attempt to stifle competitiveness.

"We can achieve the push-back on sports bullying and body shaming. Questions need to be asked on how vigilant Athletic SA has been when these rumours surfaced. How responsive has ASA been dealing with IAAF? For now the country needs to unite and push behind the #HandsoffCaster campaign. She's our ambassador and we need to do right by her," he said.

"The future of many women from Africa and elsewhere is under attack from a group of racist sporting administration. Caster's future is also at stake, her ability to make a living, to be who chooses to be, to partake in a sporting activity she loves so much is being threatened by these thoughtless regulations by the IAAF.

"There needs to be a continental condemnation of this tragic treatment of Caster, all African sporting bodies and the African Union itself condemn the treatment of African athletes by the IAAF."

The IFP's Khethemabala Sithole said the country should ban all IAAF activities should the Court of Arbitration for Sport rule in its favour.

Deputy speaker Lechesa Tsenoli said all of parliament's presiding officers were firmly behind the campaign.