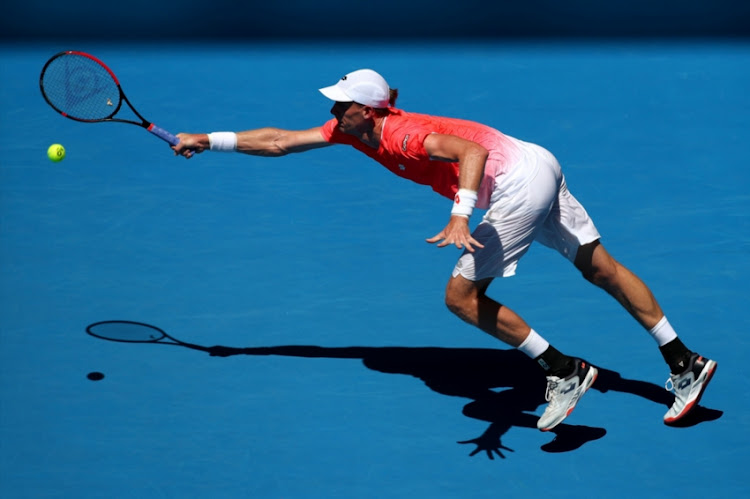 Kevin Anderson of South Africa plays a forehand in his first round match against Adrian Mannarino of France during day one of the 2019 Australian Open at Melbourne Park on January 14, 2019 in Melbourne, Australia.
Image: Cameron Spencer/Getty Images

After a gruelling qualifying schedule South Africa’s Lloyd Harris had no answers in the first round of the Australian Open‚ crashing out to Russian Daniil Medvedev in straight sets on Tuesday.

It leaves No 5 seed Kevin Anderson as the only South African left in the singles draw.

Raven Klaasen though‚ along with American partner Michael Venus‚ are the No 6 seeds in the men’s doubles‚ which starts on Wednesday.

Harris‚ the world No 119 gave a nervy performance in only his second appearance at a Grand Slam‚ producing 39 unforced errors against the 13 from Medvedev.

Harris also struggled on serve and only won seven of 28 (25%) points on his second serve‚ which gave the Russian an easy ride through the match.

The final game of the contest was a microcosm of the entire match as Harris made four unforced errors on serve.

He also qualified for the main draw of the US Open last September and is rapidly rising up the rankings after being ranked 291 in the world this time last year.

Medvedev‚ who made the ATP final in Brisbane earlier this month‚ is in good form and is certainly a dangerous floater in the draw.

In Brisbane Medvedev beat Andy Murray‚ Milos Raonic and Jo-Wilfried Tsonga on his way to the final before losing to Kei Nishikori.