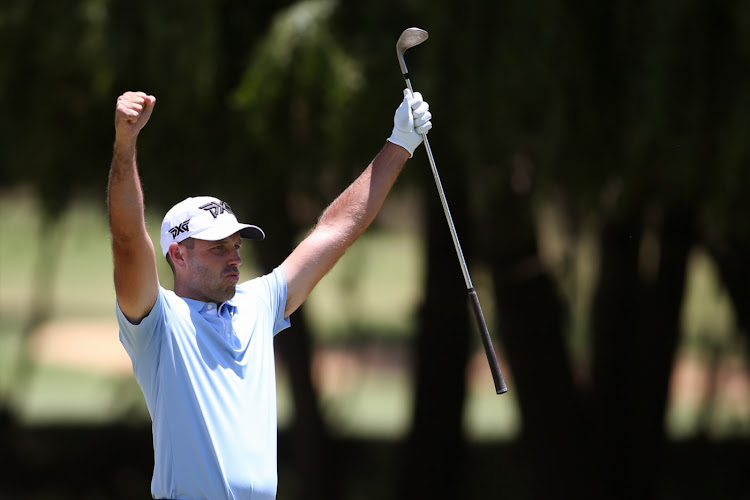 Charl Schwartzel celebrates making an Eagle on the 17th during day 2 of the SA Open at Randpark Golf Club on December 07, 2018 in Johannesburg, South Africa.
Image: Shaun Roy/Sunshine Tour/Gallo Images

An unlikely eagle on the 17th on the Bushwillow course helped propel Charl Schwartzel into the lead halfway through the second round of the SA Open on Friday.

The South African‚ who finished the first round five shots off the lead‚ mastered blustery conditions on Friday morning to card an eight-under 63. It was a bogey free round with the undoubted highlight coming on the 17th.

Schwartzel missed the fairway to the right on the par 5 which meant he could not attack the pin‚ with a water hazard protecting the front of the green. He riskily advanced his ball back onto the fairway before taking aim at the pin.

He flighted his approach well past the flag but the ball enthusiastically spun back towards the hole on the sloping green. Fortunately for the former Masters champion the ball hit the pin and dropped down into the hole for an unlikely three.

“It was one of my worst tee shots of the week so far‚” Schwartzel reflected. “I figured if I could walk off with four or five that would be good. I managed to hit a good little third shot there‚” he said about his 70m chip.

Although he scored lower on the Bushwillow course after his opening round 67‚ Schwartzel believes there is more peril there than on Firethorn.

“It is a trickier course‚” he said.

By the time he finished Schwartzel was a shot clear of Zambia’s Madalitso Muthiya‚ who followed up his impressive opening round 63 with a 68 on the Bushwillow layout.

American Kurt Kitayama‚ who tied the course record with a 63 on Firethorn in the opening round‚ could not replicate the magic.

He negotiated the Bushwillow course in an underwhelming 69 to be two shots off the lead. He however would have been mightily relieved to drain a long-range par putt on the last after overcooking his escape from the greenside bunker.

Overnight leader Louis Oosthuizen dropped a shot on the first on Friday and was four shots off the pace after his first five holes.