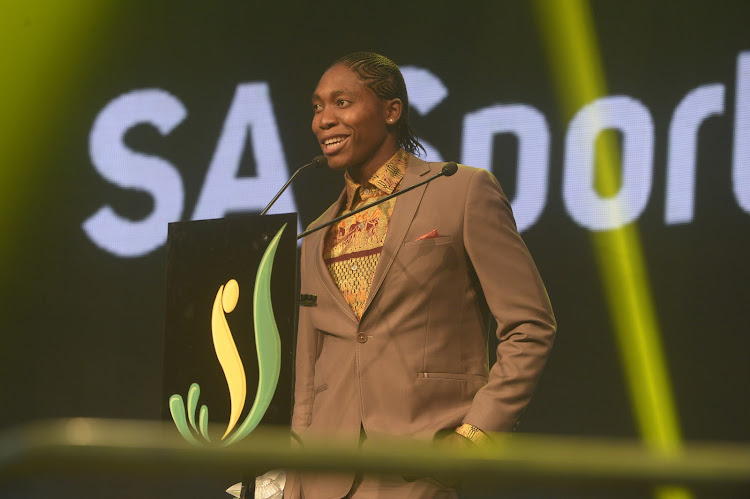 Multiple Olympic and world champion Caster Semenya stole the show at the SA Sports Awards held in Bloemfontein on Sunday night by walking away as the Sports Star and Sportswoman of the Year awards.

Semenya was also nominated for the People’s Choice Award where she was up against swimmer Chad Le Clos, long jumper Luvo Manyonga, Bafana Bafana star Percy Tau and WBO bantamweight champion Zolani Tete but the winner was not decided at the time of publishing.

Semenya‚ the Diamond League 800m champion in 2018 and 2017‚ also took the Commonwealth Games 800m and 1500m double in Australia this year and the 400m and 800m crowns at the African championships in Nigeria.

She is also the owner of South African records from 400m to 1500m and it came as little surprise when her mentor Samuel Sepeng was named the coach of the year ahead of Dr Suzanne Ferreira and Nico Coetzee.

The other major winner on the night was swimmer Chad Le Close who was named the Sportsman of the year where he managed to fend off strong challenge from WBA and Ring Magazine light-flyweight champion Hekkie Budler and Manyonga.

Commonwealth Games 100 and 200m breaststroke champion Tatjan Schoenmaker was named the newcomer of the year and she overcame competition from fellow swimmer Minke Janse van Rensburg and sprinter Luxolo Adam.

Sportswoman of the year: Caster Semenya

Sportsman of the year with disability: Mdodozi Ntutu

Sportswoman of the year with disability: Anrune Liebenberg

Team of the year: Banyana Banyana

Newcomer of the year:  Tatjan Schoenmaker

Coach of the year:  Samuel Sepeng

Volunteer of the year: Linda Hlophe

The Recreation body of the year:  Mavu Sport Development

National Federation of the year:  Softball