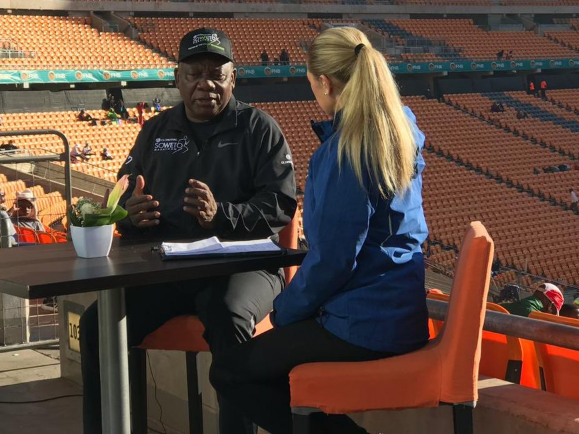 President Cyril Ramaphosa took part in the 2018 Old Mutual Soweto Marathon at FNB Stadium but did not finish and pulled after a few kilometres as he had to attend to other engagements.

The President graced the race as part of his Thuma Mina campaign which encourages healthy lifestyle and living for South Africans.

He was ushered on to the FNB Stadium pitch flanked by Sports Minister Tokozile Xasa‚ Gauteng Premier David Makhura and MEC for sport in Gauteng Faith “Mama Action” Mazibuko as ran the shortest race – the 10km.

“If you can make the time, you can have a much more healthy lifestyle, and you can lose weight as well...” President @CyrilRamaphosa speaks to the media after finishing his walk this morning. #SowetoMarathon pic.twitter.com/UBHeEzG2kf

The President arrived a few minutes late with little fanfare for the start of the 10km at 7am and ran a few kilometres before he was whisked away by his official convoy.

Race organisers said Ramaphosa had to cut his run short as he had other engagements to attend to.

The president has made time in his understandable hectic schedule and will line up alongside the strong field of some 30‚000 athletes‚ who will be pounding through the streets of the historic township.

Ethiopian Sintayehu Legese Yinesu of the Nedbank Running Club was the first runner to cross the finish line of the 25th edition of the race in an impressive time of 2:19:10‚ scooping the men’s title and the R250 000 prize money which comes with it.

But it was South African sweetheart Irvette Van Zyl‚ also of the Nedbank Running Club‚ who stole the show‚ winning the women’s 42.2km marathon for the second year running and setting a new course record of 2:33:43.

She too walked away a quarter of a million richer.

The runners pounded the streets of Soweto and ran past historic sites such as Vilakazi Street‚ which is houses the homes of Nobel Prize winners Nelson Mandela and Desmond Tutu.

President @CyrilRamaphosa joins 25 000 participants this morning for the Soweto Marathon in Gauteng. ANC wishes all participants the best of luck in completing the various distances. #SowetoMarathon pic.twitter.com/swc5zd0SZd

They also went past the biggest hospital Chris Baragwanath‚ the Hector Pieterson Museum and the Morris Isaacson High school.

“I’m thrilled to see how the running community‚ whether it be the runners themselves or the support and services crew‚ pull together for such a great cause. We work on this event all year round and we believe that we’ve delivered an event that South Africans can be proud of‚” he said.

The Soweto Marathon in pictures

Thousands of people took part in the Soweto Marathon on November 4 2018.
Pic of The Day
3 years ago

South African middle distance runner Irvette van Zyl smashed the Old Mutual Soweto Marathon record this morning to cap off what has been an eventful ...
Sport
3 years ago

Five months after giving birth‚ Irvette van Zyl is back on the prowl and says she is feeling “fit-ish” as she guns for her second Old Mutual Soweto ...
Sport
3 years ago

The 2018 Old Mutual Soweto Marathon will have a presidential feel about it after it was announced that President Cyril Ramaphosa will take part in ...
Sport
3 years ago
Next Article