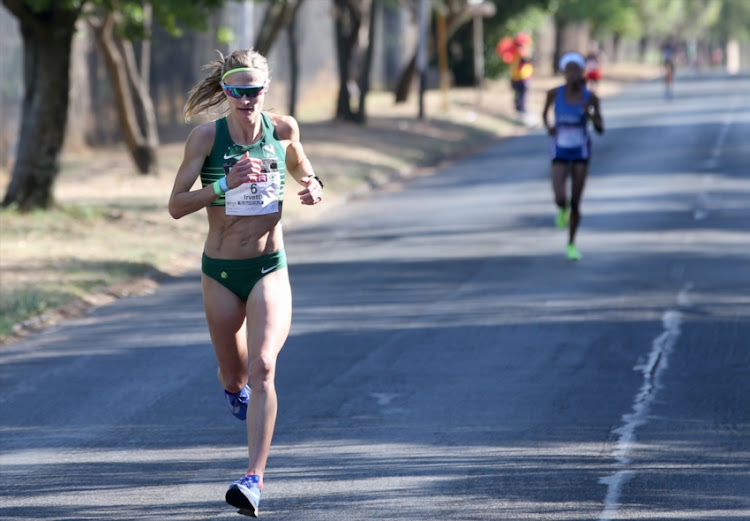 Five months after giving birth‚ Irvette van Zyl is back on the prowl and says she is feeling “fit-ish” as she guns for her second Old Mutual Soweto Marathon on Sunday triumph in succession after winning the women’s race last year.

Van Zyl crossed the finish line first in the 2017 race in a time of 2:41:06 to break a foreign stranglehold and became the first South African since 2009 to win the women’s race.

Before her victory‚ René Kalmer was the last South African women to win the gruelling race through the famous township.

The 31-year-old mother of two described the race route‚ more than half of which is hilly‚ as “brutal” but is confident of back-to-back victories.

“Under the circumstances seeing that I was pregnant for nine months‚ my preparations have gone really well. I’m feeling confident for Sunday and I’m excited to run‚” Van Zyl said.

The main race (42‚2km) will start at 6am while the 21‚1km will resume at 6.30am followed by the casual runners leaving their marks at 7am.

“I don’t know if opting for the Soweto Marathon [so soon after giving birth] is the smartest thing because it’s so hard and so hilly‚” Van Zyl admitted.

“But I’ve done my training on hills‚ but not so hard hills [as in the Soweto Marathon]‚ and hopefully I can maintain it especially in the last 10km where it is so brutal.”

It is unclear whether local favourite Mapaseka “Speedster” Makhanya‚ who clocked a time of 2:46.33 to finish second behind Van Zyl last year‚ will be running as she went underground and became entirely impossible to contact in the days leading up to the race. Race organisers were also unsure if she would take part.

Whether Makhanya will be running or not‚ Olympian Van Zyl will still have the usual suspects from the competitive East African athletes taking part to contend with. But the Olympian said she is focused solely on her race.

“It would be nice to have back-to-back victories. My baby is now almost five months old so I’m really excited just to be back running. I think I’m fit-ish. I’m very excited‚” she said.

Since giving birth to her second-born‚ Van Zyl revealed she no longer sees herself as an elite runner as time with her children and family take up much of her day.

She said she enjoys massive support from her husband‚ L.J. van Zyl‚ a respected and successful retired runner in his own right.

“It’s quite tough being a mother right now because my eldest one [Louis] is three and is taking a lot energy off me because of the jealousness he has of seeing a new-born baby [Gideon] in the house.

“I don’t think I’m really an elite athlete anymore because my life revolves around my kids.

“So the training goes around the kids and everything else is planned with the kids in mind. It’s definitely a game changer to have kids but it definitely doesn’t stop your career.”

About 30‚000 runners will crisscross the streets of the historic township on the energy-sapping route.

It is forecast to be hot and humid on Sunday but race director Danny Blumberg said there will be water points and more than one million water sachets that will be provided to runners.

“We’re going to have 17 water points during the race‚” he said.