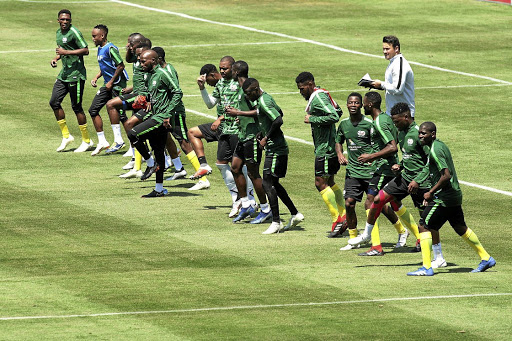 Bafana Bafana striker Dino Ndlovu has admitted that the chances of him playing against Seychelles at the FNB Stadium on Saturday (3pm) are slim.

The China-based Ndlovu's initial flight was cancelled and he only managed to arrive in SA on Tuesday - a couple of days after the national team went to camp to prepare for the 2019 Africa Cup of Nations qualifier.

Ndlovu, 28, has been in great form for Chinese League One outfit Hangzhou Greentown, for whom he has scored 18 goals in 21 appearances as they chase promotion to the Super League.

Despite his form, Ndlovu's late arrival is likely to count against him with Lebogang Mothiba and Percy Tau, who are also in good form, set to get the nod.

Bafana Bafana coach Stuart Baxter has defended his decision to call-up China-based Dino Ndlovu to the squad to face the Seychelles in back-to-back ...
Sport
2 years ago

"Eventually I arrived after two-and-a-half days on the road," he said.

"It's been a five-year roller coaster for me with the national team, from my luggage getting lost and getting injured, so I never come early as expected. It's really been tormenting me mentally.

"It's one of those things that I need to take out of my mind and focus. I need to support anyone who's here and, for me, the national team is more important than an individual.

"I don't want to put myself before the national team and be selfish. The players who the coach thinks must play this weekend have my full support.

"We have to redeem ourselves against this team. I'm not taking anything away from them, I give them respect, but I don't think they are a team that can beat us," Ndlovu added.