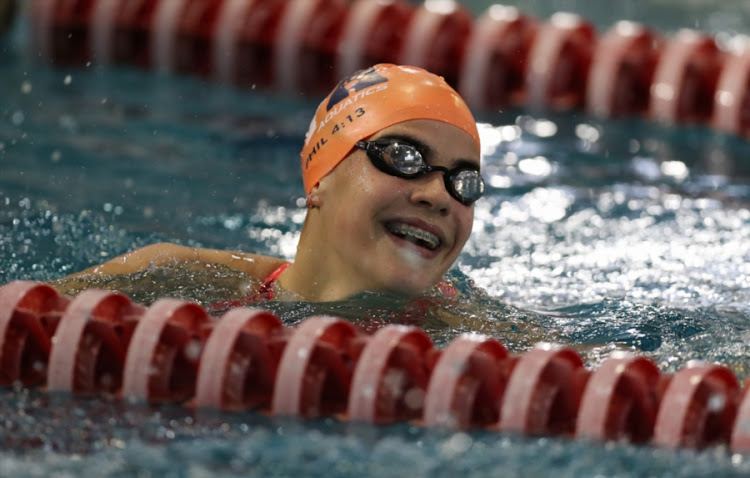 Teen sensation Rebecca Meder cracked a world championship qualifying time on the second day of the national trials in Durban on Friday as the list grew to nine.

At 16 the grade 10 pupil is the youngest to put herself in contention for selection to the team that will do battle at the showpiece in China in December.

She slipped under the criterion in the morning heats of the 200m individual medley‚ clocking 2min 12.35sec.

But Meder was given a tough challenge in the final with breaststroke star Tatjana Schoenmaker and US-based Marlies Ross trying to chase her down.

“You always want to try and go faster in the final‚ but it shows you how important the morning swim is.

“But the fight in the final was fun‚” she added with a smile.

Meder‚ who switched to home-schooling last year‚ had missed the qualifying time in the 800m the previous night by less than a second.

“It’s disappointing‚ but you pick yourself up. I was happy with my time — it was a personal best.”

Her favourite 400m IM race is on Sunday.

Ryan Coetzee‚ one of South Africa’s Commonwealth Games medallists in Gold Coast earlier this year‚ qualified in the 50m butterfly.

He went 22.93 as he finished second in the heats behind Chad Le Clos‚ who immediately scratched from the rest of the gala to take care of personal commitments‚ including getting his visa for China.

Coetzee was also given a torrid time in the final by Brad Tandy‚ another Games medallist‚ and although he won in another qualifying time‚ Coetzee too was slightly slower in the evening final‚ going 22.99.

Tandy’s 23.12 was also inside the qualifying mark.

Erin Gallagher‚ who had qualified in the 100m freestyle on Thursday‚ added the 50m butterfly to her repertoire.

Zane Waddell‚ like Gallagher‚ had qualified in the 100m freestyle on Thursday night‚ but he missed the 100m backstroke mark by an agonising two-hundredths of a second as he clocked 51.63.

He was more than a second ahead of runner-up Jacques van Wyk (52.70)‚ with two veterans taking the next two spots.

Ayrton Sweeney‚ 25‚ pulled a Le Clos as he shot out unsighted in the outside lane to win the men’s 200m freestyle.

That was the tactic Le Clos used in the same event at the 2016 Rio Games when he took the Olympic silver medal.

“It’s not my event‚” said Sweeney‚ who added the 200m IM crown a little later. “I just decided to go out fast. Before the race the younger guys were saying ‘you’re going to go out hard’‚ and I was like ‘no‚ no’‚” he said with a laugh.

The gala ends on Sunday.