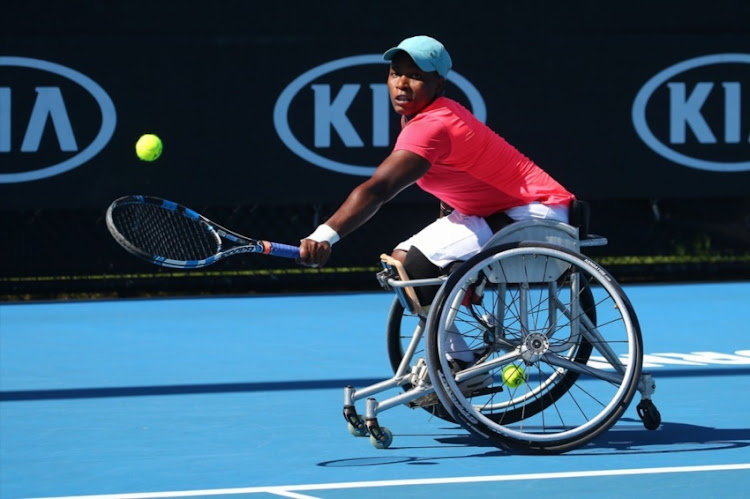 Kgothatso Montjane of South Africa plays a backhand in her first round match against Aniek Van Koot of the Netherlands in the Australian Open 2018 Wheelchair Championships at Melbourne Park on January 24, 2018 in Melbourne, Australia.
Image: Pat Scala/Getty Images

South African wheelchair tennis star Kgothatso Montjane has qualified for the US Open next month but does not know how she is going to get to Flushing Meadows in New York.

Broke Wheelchair Tennis South Africa (WTSA) officials are scrambling to raise funds for her trip and coach since they lost the support of Airports Company South Africa (ACSA) eighteen months ago.

But if she does not find a sponsor she may have to miss the tournament.

“I don’t even know how I am going to get to the US but I am hopeful that I will be there and represent the country with pride as usual‚” said Montjane‚ who has already represented the country in the Australian Open‚ French Open and Wimbledon this year.

“I don't like talking about the future because of the challenges I am having without sponsorship. I cannot really say what the future holds for me.

"I just take it one day as it comes.”

Montjane was alone in England when she played at Wimbledon recently after travelling to the tournament without her coach.

She said her coach's absence made her preparations difficult and she eventually lost 1-6 5-7 in the semi-final to defending champion Diede de Groot from Netherlands.

“Obviously I would like to have all the support on my side‚ like my coach‚ but if the situation does not allow me‚ then it is not something that I am not going to dwell on‚" she said.

"I have to keep on doing the best that I can to play well in a tournament because those are my challenges and I have been living with them for a long time.

“I need to always find a way to negotiate around the challenges and not to stress too much about them.

"It is my wish that I can take my team with me to the US Open but if they are not there I will figure it out how I make it work on the other side.”

At Wimbledon‚ where she met and received encouragement from the Queen at one of the official events‚ Montjane had to continuously ask for help from Good Samaritan coaches but this did not make her preparations any easier as she had to work with people who did not understand her regime.

“It is definitely difficult because you have to ask other people to help you and those people don’t know your style of play and other technical things which are important in preparation‚" she said.

"I will have to take someone new into how I do stuff.

"Sometimes they don’t know how to support me and it does not benefit me as an athlete focusing on the negative stuff.

"Wheelchair Tennis South Africa are also helping me out in terms of getting help.

"The message was there when I was at Wimbledon and for now I remain hopeful for the best even though there is nothing promising‚” she said.