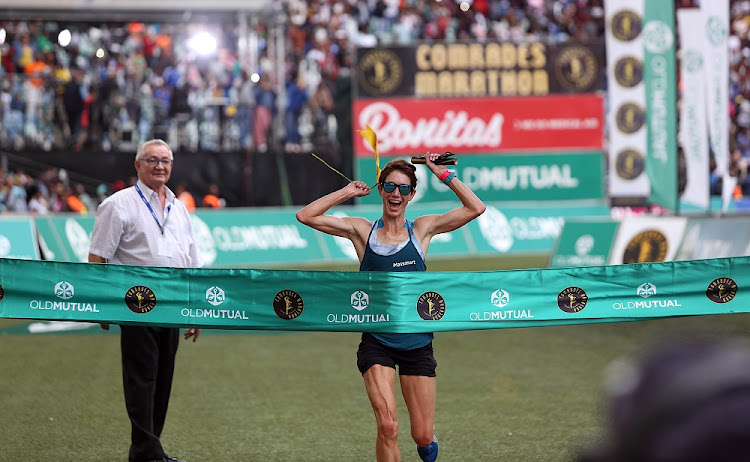 Athletics SA (ASA) has retaliated against outspoken Comrades women’s champion Ann Ashworth‚ starting disciplinary action that could see her being banned from running and even possibly stripped of her crown.

The federation has drawn up a charge sheet containing a shotgun blast of allegations‚ from bringing the sport into disrepute for her recent criticism of the organisation to cheating while running to victory in the 90.184km ultra-marathon this year.

Ashworth‚ an advocate‚ confirmed she received the charge sheet through her attorneys on Friday afternoon.

“I have taken legal advice‚” she said.

“I will be strongly defending all charges which are purely an attempt to bully and intimidate me. This is their way of keeping me quiet.”

The ASA document‚ headlined Disciplinary Proceedings‚ lists three charges against Ashworth‚ but broken down they add up to nine individual accusations‚ including two alternative charges.

The charges are largely vague and lack detail.

Six of the accusations‚ for bringing ASA and the sport into disrepute‚ relate to comments Ashworth made after she was named in the national team for the world 100km championships in the wake of her Comrades victory last month.

Ashworth immediately made herself unavailable for the team and tweeted‚ “Thanks @ASAathletics but until you actually start doing something to assist road runners in our country with funding and other support I’m not happy to compete in SA colours”.

ASA states that she repeated her criticisms and expanded on them on her social media platforms as well as in interviews with mainstream media.

Ann Ashworth completed a South African cleansweep of the Comrades Marathon‚ winning the women’s title in 6:10:04 on Sunday.
Sport
3 years ago

The organisation doesn’t list which of her comments were deemed offensive.

The first charge also lists her #standup campaign to get runners to wear black armbands at races to support her. Although borne out of her criticism of ASA for not investing in road running‚ it was also aimed at assisting disadvantaged runners.

In the second charge‚ ASA claims that Ashworth wasn’t properly licensed while running the Comrades which‚ if proven‚ could see her being disqualified.There are no details about her alleged licensing violation.

The third charge‚ an alternative in case her licence turns out to be valid‚ comprises two separate allegations.

The first is that Ashworth breached ASA’s selection criteria policy because she “participated at a national event held under the auspices of the ASA and thereafter refused to make [herself] available to represent South Africa on its national team [at the 100km world championships]”.

Bizarrely‚ this charge appears to contradict ASA’s road running selection criteria which specify that performances on “aided” courses “will not be considered for selection purposes”.

The 2018 Pietermaritzburg-to-Durban Comrades route is an aided course if ever there was one‚ with 7.2 metres of descent per kilometre‚ exceeding by far the maximum allowable drop of one metre per kilometre.

The second alternative charge is that Ashworth effectively cheated by getting assistance through pacing during part of the Comrades.

Pacing‚ which ASA’s rules define as an athlete running alongside another competitor to specifically assist him or her‚ is outlawed.

But the charge sheet — which actually states Ashworth is “guilty of pacing/seconding or receiving physical assistance” — offers no detail of what she did wrong.

It’s believed to be linked to a claim made on social media that her husband‚ David‚ started the race with her.

All the winners at Comrades Marathon 2018

South Africa completed a clean sweep at the Comrades Marathon today as Bongmusa Mthembu and Ann Ashworth ensured that the coveted titles remained on ...
Sport
3 years ago

The Comrades results website shows the couple went through the 15.57km and 30.28km marks together‚ but after that he went ahead before she overtook him‚ finishing 14 minutes ahead of her spouse.

The pacing rule is unpopular within sections of the running community‚ with one coach explaining: “It’s often just two people running together … Quite frankly‚ if ASA go after Ann for that‚ they need to go after [other top runners] too.”

ASA rules require allegations of pacing to be lodged within 30 minutes of the provisional results being made available.

It is understood that such a complaint was not made against Ashworth on the day.

The charge sheet doesn’t list the possible sanctions that could be taken against her‚ but the ASA constitution allows the board to permanently suspend athletes who are found guilty of misconduct or bringing the sport into disrepute.

ASA president Aleck Skhosana has yet to respond to questions emailed to him.