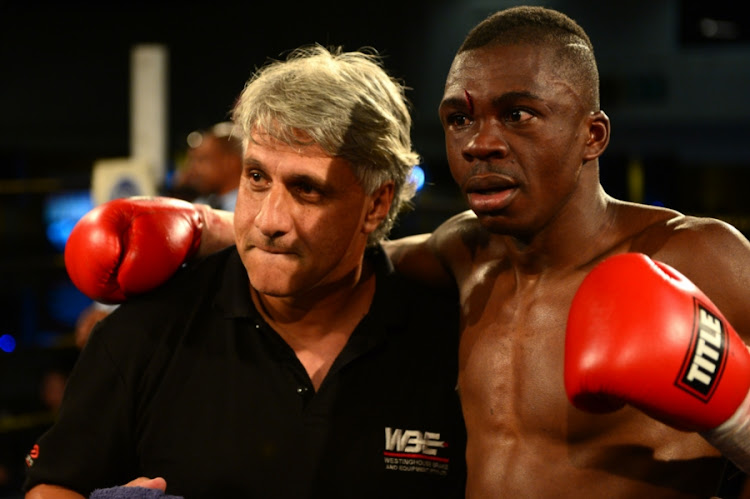 The bantamweight‚ who challenges for the WBA Pan Africa title at Carnival City on Friday night‚ is coached by Alan Toweel junior‚ who also happens to be a dog trainer.

Nemushungwa dons a heavy protective suit and starts running from canines like German Shepherds and Rottweilers.

“It’s good‚” he said with a beaming smile at Toweel’s gym in Linden‚ Johannesburg.

Nemushungwa is one of the fittest boxers in the gym‚ sometimes running the 35km there from his home in Kibler Park‚ south Johannesburg.

And then he will occasionally get sent up Northcliff Hill as part of his actual roadwork.

“When I’m fit I’m not scared of anyone‚” said the fighter‚ who takes on Fadhili Majiha for the vacant belt.

The South African‚ who grew up at Tshifudi Village near Thohoyandou‚ has fought a total of 90 rounds compared to Majiha’s 225.

“He’s a good puncher‚ but he can’t beat me. I’m faster than him.

“I’m working hard for this fight.”

Nemushungwa‚ who is hoping to study safety management through Unisa next year to add to the emergency care qualification he already has‚ is used to being considered the underdog going into fights.

He stunned prospect Joshua Studdard with a split decision over 10 rounds in December.

For the first three rounds he soaked up heavy pressure and sustained a bad cut above his right eye. But then he took control.

Nemushungwa had lost his previous bout‚ losing a split decision over four rounds.

“I don’t think he lost that fight‚” said Toweel.

“But he’s a slow starter in a fight. He gets going after two or three rounds. He’s not a four-round fighter.”

He’s never been 12 rounds before — his opponent has been that distance on six occasions — but that’s not a problem.

“This is my big opportunity. I’m ready‚ I can’t wait ... I want the big guys in bantamweight.”