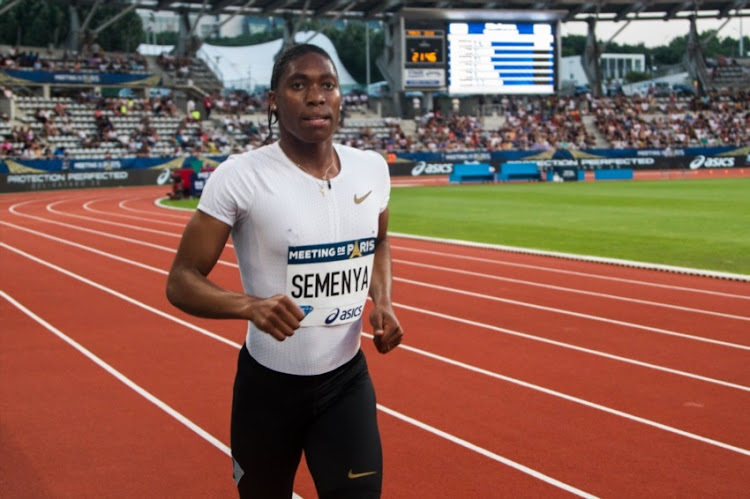 Caster Semenya turns her attention to the 1‚500m on Thursday night‚ doing battle in the Swiss city of Lausanne which is also the seat of the court that will hear her case against the IAAF and its new rules on hyperandrogenism.

Semenya‚ fresh from improving her own 800m South African record to 1min 54.25sec in Paris at the weekend‚ broke the 1‚500m national mark the last time she ran the distance‚ clocking 3:59.92 in Doha in May.

In Switzerland she takes on four runners who boast quicker season’s bests.

Semenya got the better of six of the eight at the 2017 world championships in London‚ where she took the bronze medal by dipping Muir on the line to edge her off the podium by seven-hundredths of a second.

Kenya’s world champion Faith Kipyegon and runner-up Jennifer Simpson of the US are not in the Lausanne field of 18‚ which features seven of the world championship finalists.

Semenya and Houlihan have never competed against each other‚ and the last time the South African went up against Seyaum‚ at the 2015 African Games‚ the Ethiopian triumphed.

If any of Semenya’s rivals on Thursday night are planning to win‚ they will surely have to take this race out fast from the beginning to try negate her kick at the end.

In London last year the 4:02.59 pace allowed Semenya to make a late charge on the final lap and squeeze into the medals.

Semenya‚ through her lawyers‚ will return to the picturesque city on Lake Geneva at some stage to argue to the Court of Arbitration for Sport that the IAAF’s new regulations should be scrapped permanently.

She also wants them suspended‚ before they kick in on November 1‚ until the case is decided.

The rules will require Semenya to take medication to lower naturally occurring levels of testosterone.

Semenya‚ the only South African in action on Thursday night‚ is scheduled to race at 9.28pm.

The live broadcast on SS8 begins at 8pm.