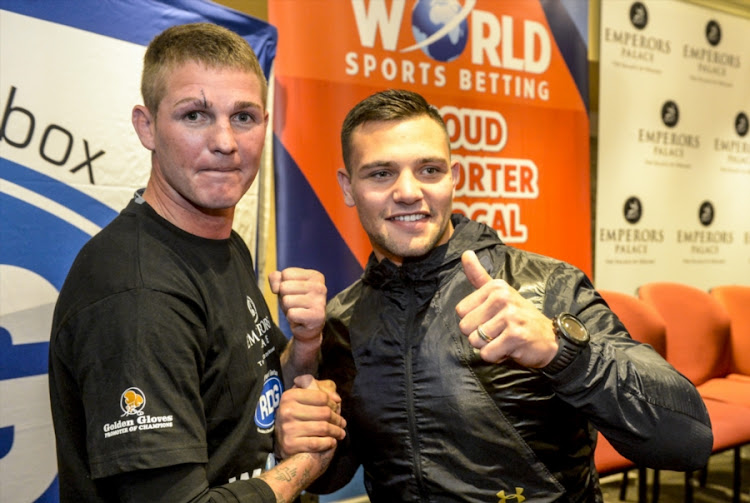 Local boxing’s bad boy Thomas Oosthuizen‚ sporting a fresh scar above his right eye‚ trumpeted his return to Rodney Berman’s stable at Emperors Palace on Monday by proclaiming to be “the toughest f…ing guy around here”.

“Tommy Gun”‚ who has spent time in prison in the past several months‚ will fight on the third of three tournaments the veteran promoter announced on Monday‚ scheduled for September 1.

The former super-middleweight and light-heavyweight will step up to cruiserweight to top the third card when he fights over 12 rounds at Emperors Palace.

Peter Smith is not one of those greedy boxing trainers who will throw their charge into the lion's den purely for the 10% of the boxer's purse money, ...
Sport
3 years ago

His opponent will be decided in the first tournament on June 23‚ when Thabiso Mchunu takes on Richards Bolotniks of Ukraine in the main supporting bout.

Thulani Mbenge‚ South Africa’s only boxing medallist from the past three editions of the Commonwealth Games‚ heads that show as he bids to win the vacant IBO welterweight title against Diego Gabriel Chaves of Argentina.

Super-middleweight prospect Rowan Campbell‚ who takes on Malkhaz Sujashvili of Georgia next Saturday‚ is pencilled in as the main attraction in Berman’s second tournament on August 10‚ facing Renson Hobyani for the SA title.

Oosthuizen‚ who had been previously discarded by Berman for his errant ways‚ including substance abuse‚ didn’t try to hide his recent spells in jail for drug possession and assault.

Trainer Colin "Nomakanjani" Nathan says he will not risk further injury to his charge Deejay "Bamooza" Kriel's left wrist and force him to feature in ...
Sport
3 years ago

“I was incarcerated‚ I’ve been in prison‚” said Oosthuizen.

“I made some mistakes in my life and I’m here to rectify those mistakes — I’m here to make myself a boxing legend‚ not just in South Africa. Internationally.

Oosthuizen hasn’t been in the ring since May last year‚ but that doesn’t mean he hasn’t used his fists.

“I have been in prison‚ how can you say I haven’t fought?” he said‚ explaining he’d had nine fights in three months.

The vertical cut that splits his right eyebrow‚ however‚ came while getting ready for church the Sunday before last‚ he said.

He was rushing outside to fetch his black socks — “you can’t wear white socks to church” — and in a rush he tripped over the dog and hit his head on a security gate.

The recent spate of boxers failing doping tests has prompted Boxing SA to go on a national roadshow.
Sport
3 years ago
Next Article