Gongqa ready and fired up for his first Comrades 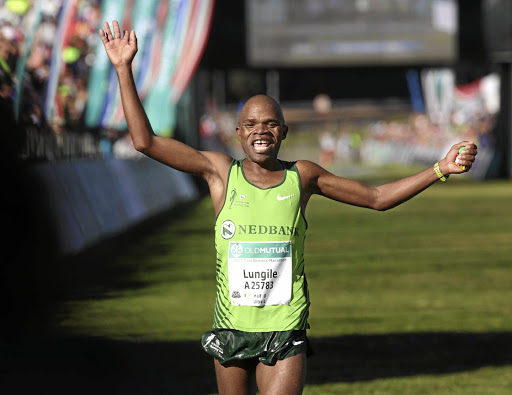 With three Two Oceans Marathon ultra-races under his belt, long-distance ace Lungile Gongqa believes he has clocked enough mileage to make a transition to the Comrades Marathon.

The 39-year-old will be among just over 7 000 runners who will debut in the Comrades on Sunday.

Race director Rowyn James confirmed that 7 550 novices have entered the race, which is 35% of the field of 18 000 that is expected at the start at Pietermaritzburg Hall on Sunday (5.30am).

After many years mostly chasing glory in the 42km races, Gongqa believes he is ready to make a huge jump from the classic distance to test himself in the unforgiving 90km ultra.

"My training went well and I believe I am more than ready to run my first Comrades," said Gongqa.

He will draw inspiration from some of his accomplished Nedbank Running Club mates like 2012 Comrades champion Ludwick Mamabolo and 2013 winner Claude Moshiywa.

"I might not have trained with them, but they have shown that winning a Comrades title is possible," said Gongqa, adding that a top-10 finish was a realistic target.

"I have competed against most of the guys; I know their strengths and weaknesses."

"I went there for high altitude [training]. It was very cold in the morning, warmer during the day and I expect to run in the same conditions."

The Comrades Marathon Association has been holding road shows around the country to share information on training, diet and tips on the race.

"Plan your race around that target and stick to it."

He advised the newcomers to never stop moving during the race.

"Do lots of walking but never stop moving. Every second of the day you must be taking a step forward to Durban."

The race starts at 5.30am outside the Pietermaritzburg City Hall and finishes 12 hours later at the Moses Mabhida Stadium in Durban.