Catwoman Serena back in business as Nadal, Sharapova survive scares 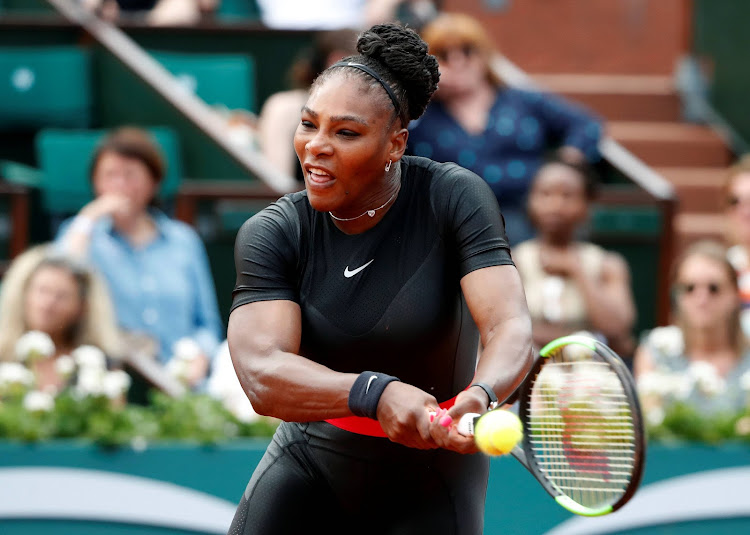 Serena Williams of the U.S. in action during her first round match against Czech Republic's Kristyna Pliskova.
Image: REUTERS/Pascal Rossignol

Serena Williams made a winning return to Grand Slam tennis which was as memorable as her body-hugging black catsuit when she reached the Roland Garros second round on Tuesday.

The 36-year-old downed Kristyna Pliskova of the Czech Republic 7-6 (7/4), 6-4 to register her first victory at the majors since her 2017 Australian Open triumph.

“I missed Roland Garros so much, I missed the battle,” Williams, the 2002, 2013 and 2015 champion, said after playing her first clay court match since finishing runner-up to Garbine Muguruza in the 2016 final on the same Philippe Chatrier Court.

“It’s been two years since I played here. It wasn’t easy but I have been training really hard. I feel good and just so happy to be back here.”

As Williams — and her eye-catching outfit — grabbed the headlines, there were wins but a few scares for 10-time champion Rafael Nadal and two-time winner Maria Sharapova.

Sharapova, playing the tournament for the first time in three years after missing 2016 through a doping ban and last year when she was refused a wildcard, battled from a 0-3 deficit in the final set to beat Dutch qualifier Richel Hogenkamp 6-1, 4-6, 6-3.

Williams, the winner of an Open era record 23 Grand Slam titles, had arrived at Roland Garros with just four matches under her belt in 2018, the last of which was in Miami in March.

Having been off the tour to give birth to daughter Alexis Olympia Ohanian in September, many in the sport wondered if she would still be a contender at the majors especially with her ranking at 451.

However, she gave a stinging response to the doubters on Tuesday even if her win over the 70th-ranked Pliskova tested the American.

Arriving on Philippe Chatrier Court in a black catsuit, offset with a pinkish-red waistband, Williams trailed 0/3 in the first-set tiebreaker.

The three-time champion champion then fell 0-2 behind in the second set and was forced to retrieve another break to level at 4-4.

As she served for the match, she even slipped into the net, righting herself sporting an embarrassed smile.

She saved three break points in an eight-minute-plus 10th game before taking victory, setting up a second-round clash with Australia’s Ashleigh Barty.

The only consolation for Pliskova, the twin sister of world number six Karolina, was finishing with 15 aces, the most hit against Williams since such records began to be kept in 2008.

World number one Nadal had been two sets up but 0-3 down in the third to Bolelli when rain caused the tie to be suspended late Monday.

The top seed eventually claimed victory on a third match point when Bolelli dumped a forehand into the net.

Nadal, bidding for an 11th title in Paris and his 17th major, next faces Argentina’s Guido Pella for a place in the last 32.

“I really suffered today but it was a good test,” said Nadal who had been in danger of dropping his first set at Roland Garros since his 2015 quarter-final loss to Novak Djokovic.

Sharapova, the 28th seed, will face Croatia’s Donna Vekic in the second round.

“I love the challenge of being in a Grand Slam draw and figuring out a way to win,” Sharapova said after a match that was pushed back from Monday due to thunderstorms.

The 31-year-old, five-time major champion, took just 24 minutes to win the first set of a match which was delayed from Monday due to thunderstorms, but threw away a 3-1 lead in the second.

Sharapova was staring down the barrel of falling at first hurdle in a Grand Slam tournament for the first time since the 2010 Australian Open when trailing 3-0 in the third, but the former world number one dug deep and reeled off six straight games to edge into round two.

The Russian, who was Paris champion in 2012 and 2014, fired 35 winners in her victory on Court Suzanne Lenglen.

Canadian teenager Denis Shapovalov eased to a 7-5, 6-4, 6-2 victory over Australian John Millman in his first ever main-draw French Open match.

World number one Simona Halep, twice a runner-up, had her opener against Alison Riske, the 83rd-ranked American, put back to Wednesday.