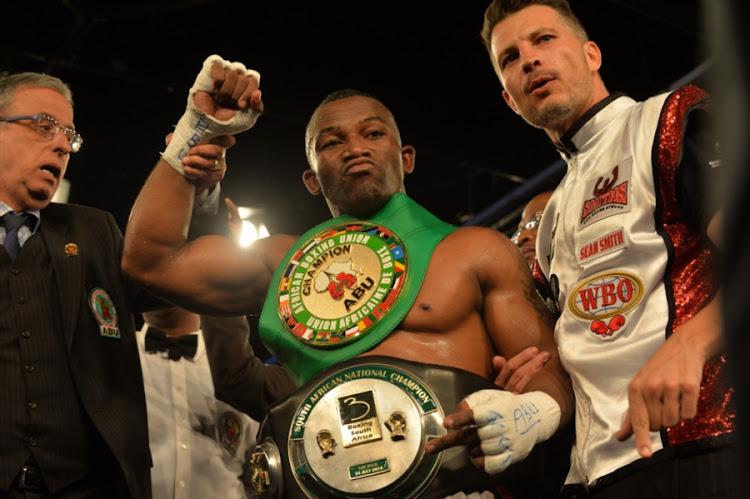 South African boxer Thabiso Mchunu celebrates during the Hurtin' for Certain boxing event at Emperors Palace on June 10, 2017 in Johannesburg, South Africa. Mchunu's promoter Rodney Berman says a win over Ricards Bolotniks of Latvia on June 23 2018 in Johannesburg will reignite the southpaw's ambitions while a loss will be catastrophic given how his career has stuttered in recent years.
Image: Lefty Shivambu/Gallo Images

Awkward left-handed boxer Thabiso "The Rock" Mchunu will now meet Ricards Bolotniks of Latvia in the Golden Gloves tournament to be held at Emperors Palace on June 23 - promoter Rodney Berman has announced.

Thulani "Evolution" Mbenge will put his WBC International welterweight title on line in one of the bouts that will form part of "Bombs Away" programme.

Berman will announce Mbenge's opponent in the coming weeks.

Mbenge from Mdantsane and Mchunu of KwaXimba in Cato Ridge near Pietermaritzburg are trained in Johannesburg by Sean Smith.

That would have been a super shootout between these two talented left handers.

But Oosthuizen's wayward lifestyle has left him in jail at the Boksburg Correctional Services where he has been languishing since February 3.

The former IBO super middleweight and light heavyweight champion was arrested in Boksburg North‚ east of Johannesburg for being in possession of drugs.

He has already appeared in court and denied bail.

It is alleged that he provided arresting officer with false particulars‚ stating that his name was Willian Grove aged 27‚ and that he lived in Trichardt Road‚ Parklands Estate in Boksburg.

The 29-year-old Oosthuizen in fact hails from Van Dyk's Park also in Boksburg.

Berman - who has been kind to the boxer despite his endless escapades‚ including pulling out of a WBA title fight against then holder Jürgen Braehmer in Germany - said there were so many obstacles not least a court battle set down for next week for Oosthuizen.

Berman has signed Bolotniks in a bout which is a crossroads fight for Mchunu.

"A win will reignite the southpaw's ambitions.... a loss will be catastrophic given how his career has stuttered in recent years‚" said Berman.

Mchunu lost to Ukrainian Olesandr Usyk (KO 9) for the WBO cruiserweight belt in December 2016 and beat Johnny Muller on points for both vacant SA and ABU title in June.

Mchunu - with 18 wins against three losses - then lost to 12 fight novice Constantin Bejenaru of Moldavia for the WBC International and Continental Americas titles in November.

Mchunu is 30 years old‚ two years older than the right handed Latvian‚ who has 11 wins‚ four losses and a draw.

Bolotniks last fought in March when he knocked 35 year old Argentinian Alejandro Emilio Valori in the first round.

Bolotniks has never fought over eight rounds since he fought his first professional fight in 2013.

Mchunu has already been involved in 12 round bouts and he completed only two of them. He won nine and registered seven stoppages in those bouts. Mchunu has 11 knockouts in total.

Mchunu possesses outstanding skills and defensive smarts but has a habit of going walkabout when the pressure is on‚ a habit that has cost him dearly against Usyk and Ilunga "Junior" Makabu.

Makabu from Congo stopped Mchunu in the 11th round of a bout Mchunu was winning in Durban in 2015.

They actually fought for the rights to challenge for the then vacant WBC cruiserweight title.

Makabu was stopped in three rounds by Englishman Tony Bellew in May 2016.

"When he's on song‚ however‚ he is a joy to watch. The boxing clinic he gave to Johnny Muller last year being a case in point‚" said Berman as his parting shot.

Top boxing promoter Rodney Berman has made an impassioned plea to the International Boxing Hall of Fame to honour former IBF junior featherweight ...
Sport
4 years ago

It could get ugly as foes square up

The rematch between Akani "Prime" Phuzi and Chris "The Wolf" Thompson on Sunday has the potential to be the ugliest local shootout in the seven-bout ...
Sport
4 years ago
Next Article