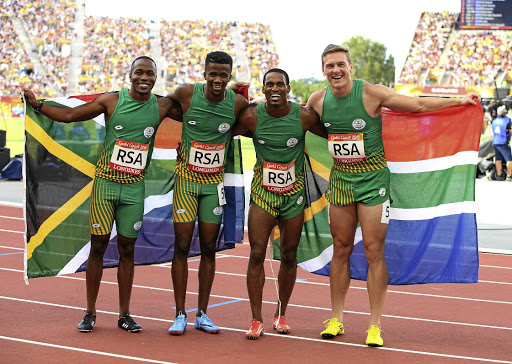 After previous failures denied SA a potential medal in the men's 4x100m relay despite the local sprint revolution, Athletics SA (ASA) wants to build on the team's silver medal from the just-concluded Commonwealth Games.

The quartet of Akani Simbine, Anaso Jobodwana, Henricho Bruintjies and Emile Erasmus handed the country a first significant relay medal since the 4x400m's silver at the 2011 IAAF World Championships in Korea.

ASA excellence manager Hezekiel Sepeng said it proved in the past that trying to put together a team a few weeks leading to a major event was not ideal. "Trying to do it on the eve of competition was not an ideal situation because at that point athletes are focusing on their individual events," Sepeng said yesterday.

"Going forward, we have learned that we must start preparations early and, most importantly, we need a buy-in from all the stakeholders - the athletes and their coaches.

"Team work is very important as this would help to put a training programme together for our relay teams, without interrupting the individuals [programmes]."

Prior to the relay at the Gold Coast, Simbine and Bruintjies gave Team SA a 1-2 finish in the 100m. "We have two major championships coming - the [inaugural] IAAF World Cup in London in July and the African Championships [in Nigeria in August] - and that's another opportunity to showcase our talent in the relay."

Sepeng said it would be easy to enter the relay team into competitions because of their national record-breaking exploits in Australia.

"The advantage is that most of our 4x100 relay guys are based in Gauteng and it will be easy to get them together."

Sepeng admitted that key focus in the team's training should be the changeovers.

It proved at the Gold Coast that they were not fluid and those few seconds exchanging batons with slight difficulty meant SA was chasing the race, only for anchor Simbine to squeeze onto the podium.