It's Simbine v Magakwe in the race that never was 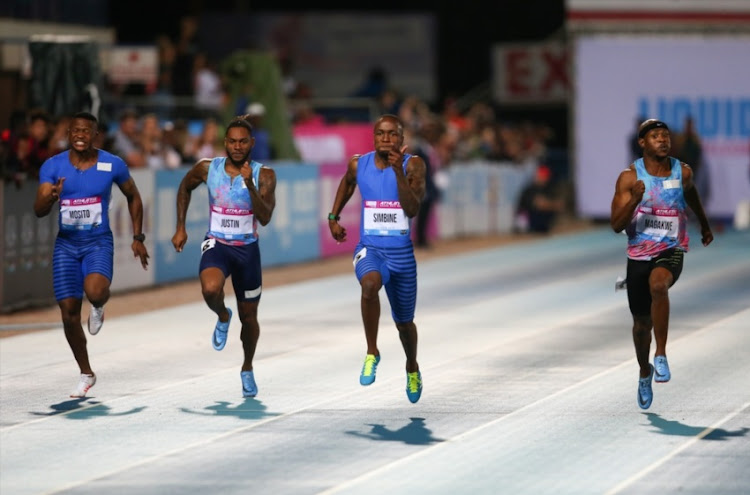 The 100m final that never was will happen after all.

Akani Simbine‚ who withdrew from the South African championships in Pretoria at the weekend after feeling tightness in a hamstring‚ will compete against newly crowned 100m champion Simon Magakwe in the third and final Liquid Telecom Athletix Grand Prix meet in Paarl on Thursday.

Magakwe‚ Bruintjies‚ Roscoe Engel and world under-18 200m champion Retshiditswe Mlenga finished in top five of the 100m final at the Tuks track‚ and now they will get to do it again with Simbine in the mix at the Dal Josaphat Stadium.

Seven-times champion Magakwe‚ who won the title for six straight years until being banned for a doping offence in early 2015‚ became the first South African to break 10 seconds in the 100m final at the 2014 national championships‚ beating a field that included Simbine‚ Bruintjies and Engel.

These days‚ Simbine is the top dog and he is raring to go in Paarl.

“I felt a tightness in my hamstring and after discussing it with my coach‚ we opted to withdraw from the championships‚” Simbine said in a statement released by organisers.

“This was one of the hardest decisions that I have made‚ as the national title means a lot to me and I enjoy running in front of my home crowd. It is important to me to be able to do that as they always support me‚ so I feel it is my responsibility to reciprocate by racing at Tuks.

“But I had to make the hard decision‚” said Simbine‚ owner of the 9.89sec SA record.

For a few months Simbine and Bruintjies shared the 9.97 mark.

Gauteng-based Bruintjies is the last man to have beaten Simbine on home soil‚ edging him at the SA championships in 2016‚ and he is eager to race at his old home.

“I’m looking forward to running at home‚” said Bruintjies‚ who originally hails from Paarl. “Moving up to Tshwane was the right decision for my athletics career‚ but being able to run at what I still see as home‚ is a big deal for me.”