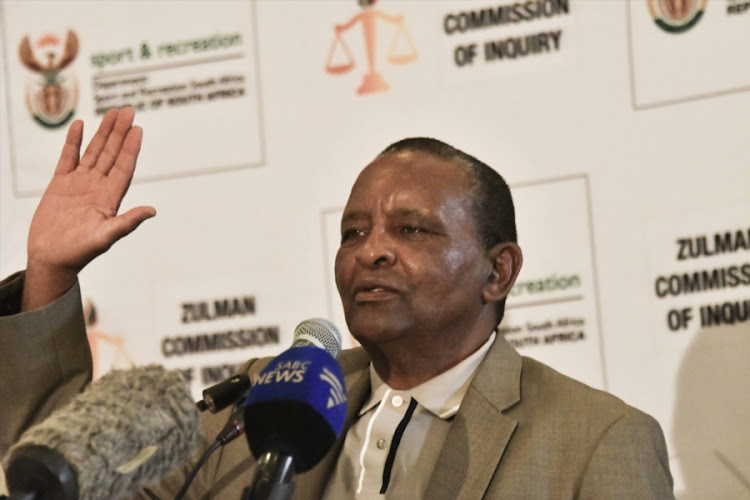 A belligerent Gideon Sam duelled at times with members of the ministerial committee of inquiry into governance matters at the SA Sports Confederation and Olympic Committee (Sascoc) on Wednesday.

He insisted the $500 daily per diem he is entitled to as Sascoc president was “reasonable to too little” and defended the decision to increase board members’ per diems from $200 to $300 during the 2016 Rio Olympics where they stayed in a “scruffy” hotel.

Asked if the more than R2.2-million in per diems given to Sascoc board members annually‚ including the $500 given to Sam‚ was excessive‚ Sam replied: “I’ll put it to the council [Sascoc’s highest decision-making body].”

Gaibie: “Mr Sam‚ I’m asking for your personal view‚ whether you think it’s exorbitant or not?”

Sam‚ who also gets a R21‚000 monthly allowance for petrol‚ cellphone and other costs‚ said the board members had to pay for taxis to travel around Rio‚ and that they had to eat at restaurants because there was no food available at their hotel.

Gaibie put it to him that board members lived generally in four and five star hotels.

“In Rio they stayed in a very scruffy hotel where sometimes there was not even enough hot water‚” replied Sam.

He added that Sascoc was considered a joke financially compared to the big sports federations in SA.

“If you look at the presidents of the bigger federations in this country‚ I’m just a small fry.”

Sam: “Reasonable to too little … If you’re going [British] pounds‚ it’s hopeless. You must work out in the country where you are. If you go to France and you work it in the Franc (sic)‚ it’s totally useless.”

The Sascoc board is split with Sam on one side and fired CEO Tubby Reddy on the other‚ and Sam got emotional when he was told that Reddy had offered a different version on the increased Rio per diems.

Sam: “Yes‚ many of his versions will be‚ and that’s why I was of the opinion … a bigger judicial commission of inquiry would have done justice to what we wanted to find out.”

Gaibie: “You were opposed to a small committee of inquiry in the first place.”

Sam: “No‚ that’s why I’m here. I’m sitting with a daughter who is dying in hospital and I give you the respect and I come and give evidence here … from here I run to the hospital and see whether my daughter’s still alive … and I could even lose my grand-daughter in the process.

"But here I am giving you all the respect‚ answering all your questions.”

Sam also became combative with Gaibie when she took him to task about him responding to the Sport Minister in a letter without consulting most of his board members.

Sam: “I disagree … Who represents the board in its absence?”

Gaibie: “No‚ Mr Sam‚ in today’s technology it’s quite easy to communicate with board members.”

Sam: “No‚ you’re not answering my question.”

Sam appeared aggressive even as he gave his name for the record at the start of his testimony. “Gideon Napoleon Sam‚” he said in a raised tone.

Five minutes in he was shouting at committee chairman‚ retired judge Ralph Zulman‚ who was asking him about Sascoc’s controversial 2016 elections where some candidates were deemed ineligible in some quarters‚ although they were allowed to stand.

Zulman: “Let’s go back to the previous decision. Who made that decision and when was it made?”

Zulman: “The decision that it [the election] was lawful. You talk about the council‚ let’s not run around in circles please.”

“I’m not running around in circles‚” Sam snapped back.

“I’m answering you now for the third time‚” said Sam‚ explaining the Sascoc council allowed the election to go ahead.

Sam also duelled with the third committee member‚ Dr Ali Bacher‚ who pointed out the Sascoc president was defensive.​

The SA Football Association (Safa) has accused the SA Sports Confederation and Olympic Committee (Sascoc) of costing it “millions” in sponsorship by ...
Sport
3 years ago

Sascoc inquiry: ‘It sounds to me like a whole bunch of corrupt activities’

“Common practice” for board members and staff to seek favours from Sascoc service providers branded as corrupt.
Sport
3 years ago

Dismissed Sascoc CEO Tubby Reddy acted in a way that was “tantamount to fraud”‚ a member of the ministerial committee of inquiry into SA Sports ...
Sport
3 years ago

Olympic body's former legal adviser, Raymond Hack, offered opinions this week that could further pin the beleaguered board to the cross.
Sport
3 years ago

SA Sports Confederation and Olympic Committee (Sascoc) board member Les Williams says he met an investigator from a company that has been widely ...
Sport
3 years ago
Next Article