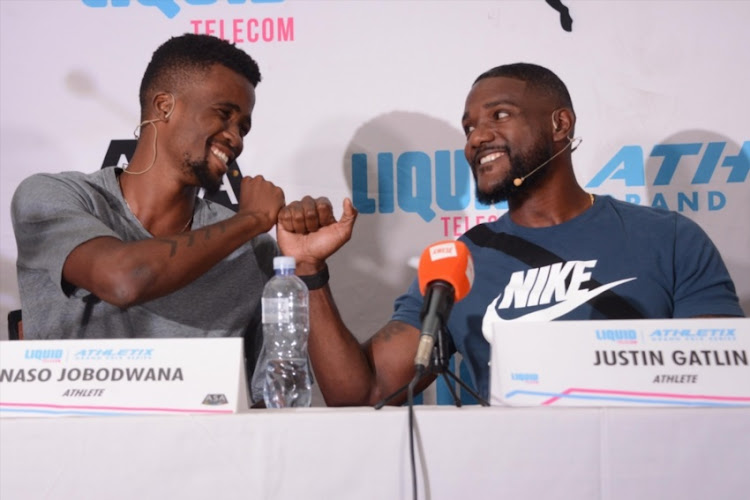 The fastest man in the world‚ Justin Gatlin‚ said on Wednesday he was a fan of Wayde van Niekerk as he waxed lyrical about South Africa’s 400m world record-holder.

Gatlin was far more poetic about the South African than Usain Bolt‚ the Jamaican he dethroned for the 100m crown at the world championships in London last year.

Bolt had insisted on his trip to SA in January that Van Niekerk — the Olympic and double world 400m champion who also took the 200m silver in London — was awesome and brilliant‚ but was “not really a sprinter”.

Gatlin was asked his thoughts on Van Niekerk at a press conference on Wednesday morning‚ ahead of his 150m showdown against Anaso Jobodwana at the Tuks track on Thursday evening.

The American first responded with a joke.

“When you run the 400m world record in lane eight you can be whatever you want to be‚” the American veteran said to much laugher‚ referring to Van Niekerk’s 43.03sec run at the 2016 Rio Olympics.

“If he comes out and says he’s a javelin-thrower‚ hey‚ I’m waiting at the javelin line to see what he’s going to do.”

But then Gatlin turned serious‚ pointing out there were different kinds of sprinters and runners —some had pure speed‚ others speed endurance and still others with endurance and power.

“I can’t describe Wayde‚ man‚” he said‚ before delving into verbal prose.

“It’s poetry in motion watching him run‚ I can tell you that.

“Him coming down that straight‚ I just see it in my mind … he seems like he’s just gliding like a gazelle bringing it home‚ it’s just amazing to watch.

“I’m definitely a fan of his‚ for sure.”